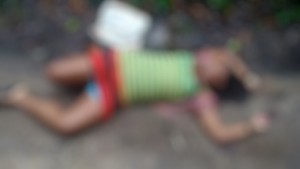 A blurred image of the murder victim

A man shot dead his fiancé before committing suicide by turning the weapon himself at Kartabo, Mazaruni, police confirmed.

Residents gave her name as 19-year old Glenda Williams and his as 22-year old Terry Alexander, a gold miner.

Police and residents said the incident stemmed from a domestic dispute.  Residents said he shot the woman to her chest and then shot himself in the head on a lonely area of a road at Kartabo in western Guyana. Their bodies were found about 20 feet apart from each other.

Kartabo is located about 10 minutes from the township of Bartica.