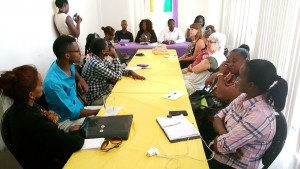 Participants at SASOD’s of “Lunch Talk” on the “Social Justice and the Cross Dressing Case” on Friday, February 19, 2016.

Guyana’s gay and lesbian community hopes to soon have a clearer idea whether they could cross-dress freely without fear of being charged, even as they thicken their dossier for constitutional reform.

Co-Chairman of the local gay rights organisation, Society Against Sexual Orientation Discrimination (SASOD), Joel Simpson said a Registrar has already contacted a number of plaintiffs in a pending appeal of a High Court decision on cross-dressing.

Stemming from the arrest and prosecution of several persons for the colonial-era offence, they had challenged the constitutionality of the law against cross-dressing.

Now, the litigants want the Court of Appeal to give a clearer interpretation of then Chief Justice, Ian Chang’s ruling that cross-dressing was permissible unless it is done for an “improper purpose.”

Elaborating on his remarks at a SASOD-organised “Lunch Talk” on the “Social Justice and the Cross Dressing Case,” Simpson told Demerara Waves Online News that the plaintiffs want the Court of  Appeal to arrive at a precise interpretation of the Chang decision. “It’s around the dubious nature of this proviso that he added about ‘improper purpose’. We are saying it’s not clear, it’s uncertain in scope, nobody understands what it means, he didn’t say what it means, the law didn’t say what it means, there is no case law on what it means and he didn’t give any reasons why the crackdown in February, 2009 might be considered an improper purpose,” Simpson said.

Asked whether SASOD was concerned that the Court of Appeal might find that cross-dressing during the course of commercial sex work might be considered an “improper purpose,” he noted that Guyana does not have laws against prostitution, except those that prohibit benefitting from the proceeds of prostitution and the running of brothels. “We describe the one at the Constitutional level as a partial victory. We think a more senior court will give us a full victory,” he added.

Days after Prime Minister Moses Nagamootoo told the National Assembly that a Constitutional Reform Commission would be established later this year after consultations with the opposition People’s Progressive Party Civic (PPPC) and other stakeholders in keeping with its 2015 elections campaign promise, the SASOD official said his organisation was ready.

Simpson said priority would be given to make a case for the repeal of the British colonial laws that criminalize same-sex intimacy (including buggery) even between two consenting adults in private.

He detailed that, as part of preparations for constitutional reform, SASOD was researching how to strengthen the 1997 Discrimination Act by including sexual orientation, gender identity and health status. “We are doing ongoing research and writing different kinds of briefing papers on specific sub-topics on a regular basis,” he said.

The top SASOD official noted that homophobic and trans-phobic discrimination has been impact adversely on employment, health and education. “We have a lot of specialist research which is showing the impact of homophobic and trans-phobic discrimination in these laws in specific sectors and on specific issues including health, education and work,” he said.

Six years ago on this date – February 19, 2010 – four transgender persons and SASOD filed a constitutional challenge to the laws against cross-dressing in Guyana – on the eve of the United Nations’ World Day of Social Justice observed annually on February 20.

On September 6, 2013, then Chief Justice Chang delivered his judgment in Quincy McEwan, Seon Clarke, Joseph Fraser, Seyon Persaud and the Society Against Sexual Orientation Discrimination (SASOD) vs. Attorney General of Guyana. Section 153(1)(xlvii) of the Summary Jurisdiction (Offences) provision makes a criminal offence of a man wearing female attire, and a woman wearing male attire, publicly, for any improper purpose.  The Chief Justice ruled that cross-dressing in a public place is an offence only if it is done for an “improper purpose.”

In October 2013, the litigants filed an appeal which they are currently awaiting.

Six years since the filing of this historic constitutional suit, a diverse panel will discuss the movement for social justice in Guyana in the context of this case challenging laws against cross-dressing.