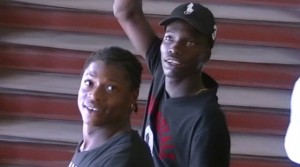 One of the 60 persons, who received a Presidential Pardon within the past nine months, was Wednesday jailed for escaping for lawful custody.

Twenty-year old Joshua Joseph was also remanded on charges of robbery under arms and break and enter.

Guyana’s Chief Magistrate Ann McLennan sentenced him to 18 months imprisonment on the charge of escaping from unlawful custody on 13th February, 2016 at the Brickdam Police Station where he had been held on robbery charge.

Police Prosecutor Deniro Jones told the court that Joseph was being escorted by police to the Georgetown Magistrates’ Corut when he behaved in a disorderly manner, shoved and scuffled with the officer who was guarding him and other prisoners and fled.

Joseph was arrested on 15th February at the Stabroek Market area.

Joseph told the court that he escaped because he was clad in old clothing and had wanted to appear on court properly dressed. He explained that the handcuff opened when he fell.

Prosecutor Jones told the court that Joseph was one of the persons who had been pardoned by President David Granger , but he could not say what was the offence he had been incarcerated for.

He pleaded not guilty breaking and entering the dwelling of Osa Omaree on 19th January, 2016 and stealing one 21-inch Sharp television, one laptop computer, one gold chain and one pair of gold earrings with a total value of GYD$123,000.

Joseph and 21-year old Kester Mc Phoy also pleaded not guilty to a joint charge of robbery under arms allegedly committed on 3rd February, 2016 on Felicia Walton. Police said, being armed with a knife, they robbed the woman of a gold chain of GYD$60,000.