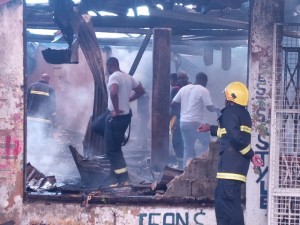 FLASH BACK: Fire fighters searching the rubble for the remains of the two teenage sisters who perished in the blaze.

Two men were Monday arraigned for the murder of a father and his teenage daughters by burning a building at the corner of Robb and King Streets more than one year ago.

They were not required to plea to the joint indictable charge after it was read to them by Chief Magistrate, Ann Mc Lennan.

Particulars of the charge are that between November 16 and December 21, 2014 Krishna and Kissoon murdered 15-year old Theresa Rozario,  14 year old Feresa Rozario and Hilrod Randolph Thomas in the course or furtherance  of arson  at  a dwelling house. The girls’ charred remains were found among the rubble while Thomas died several days later from second and third degree burns.

Crime sleuths cracked the case after a drug addict said he had been offered money to torch the building which has been the subject of a long running property dispute. Investigators believe that the duo wanted to get the occupants out and claim prescriptive rights for the property.

They were reportedly asleep at the time the fire destroyed their home.Their father, Hilrod Randolph Thomas jumped through a window but suffered second and third degree burns. He later succumbed at the Georgetown Public Hospital Corporation.