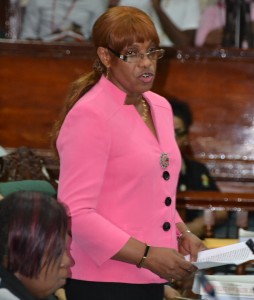 Controversial People’s Progressive Party Civic (PPPC) Member of Parliament Dr Jennifer Westford delivered her maiden speech in the 11th Parliament on Tuesday, using the opportunity to urge the Guyana government to do right for the people.

Westford who is currently before the courts on two dozen charges of fraud amounting to GYD$694M delivered her address to the House without any heckles from the Government side of Guyana’s House.

A former Public Service Minister, Westford said that many public servants are anxious as they are unsure of their careers in the public service.

“Today our public servants are suffering from anxiety syndrome because they are unsure whether they will join the scores of their colleagues who were unceremoniously dismissed from their jobs,” she stated.

Referencing the allegations of dismissal, Dr Westford stated that the developments have had adverse effects on the morale of public servants.

She urged that government look at the Standard Operating Procedures of the public service and do so with the hiring on contract workers in mind.

Dr Westord told the House that “this unilateral decision by the government to discontinue contract employment takes away the right from the worker to choose,” his/her terms of employment.

Still speaking uninterrupted, Westford moved on to the announcement to band the importation of cars older than 8 years. She argued that this will  not cause less accidents and Guyana already has a low output of carbon hence there is nothing to be worried about.

Turning her attention to the ban on used tires, she stated too that this measure needs revision.

Dr Westford made it clear that it is her view that banning would not work.

“Please don’t throw away the baby with the bath water…Our people need to be given more not to have the little they have taken away from them,” she said.

Finance Minister, Winston Jordan announced, “as part of measures in support of government’s programme of ‘greening’ the economy and protecting the environment in the 2016 National Budget, that used tyres would be banned and the removal or reduction of excise taxes on motor vehicles under foir years old depending on their CC and the restriction on the importation of used and reconditioned vehicles to under eight years from the date of manufacture.

Those have been greeted with mixed reactions from sections of the public including motorists and auto dealers who say that, based on their calculations, it would be more costly to import new vehicles and new tyres.