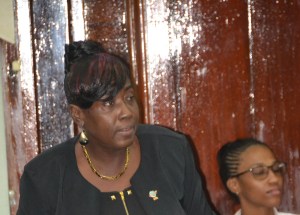 Junior Communities Minister Valerie Patterson has revealed that there will be some major developments in the Housing Sector in the near future as the government moves to modernize the sector.

Valerie, appointed to her post just over a month ago, passionately delivered her contribution to the 2016 Budget debates indicating that what she has so far encountered has made her cringe.

“Some of the stories that I have encountered in my short sojourn would make any caring leader cringe,” she stated.

She emphasized that the government is not in the business of “handing out house lots” hence some reforms have to be made.

“We shall ensure that all state sponsored housing development are provided with basic infrastructural services…We are not in the business of handing out house lots…our goal is to provide service lots…So when we give the people they can begin to build,” Patterson stated.

She stated too that in some areas the conditions under which housing schemes are developed are less than desirable. Patterson made a vow to pursue contractors who would have performed shoddy works stating “we will deal with them.”

Patterson pointed to plans to construct turnkey houses, duplexes and condominiums as part of a fresh approach at Perseverance.

“We are currently looking at a system where someone…can go online and find out the status of their application,” she added.

Meanwhile the Minister indirectly accused the PPP of politically distributing house lots and developing housing projects pointing out that many of these were done in areas that are considered to be PPP support bases.

“We will make affordable house lots available to all Guyanese throughout all the regions,” said Patterson.

Quick on the retort, PPP MP Zulfikar Mustapha said that the Minister should give kudos to the PPP and build on what was left by the former administration.

“We should not come into this House with rhetoric when you belong to a Party that destroyed the housing sector.

You should come with kudos and say we will improve it,” he stated.

He also challenged the Minister to show exactly how the sector will be developed.

“When you come here you must come with a program. Don’t say you will give affordable housing to people. How will you do it?” he questioned.