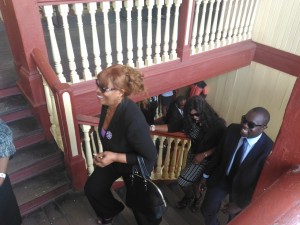 Former Public Service Minister, Dr. Jennifer Westford and her then Principal Personnel Officer, Margaret Cummings (third from right) arrive at the Georgetown Magistrates’ Court on 1st February, 2015 to answer a joint charge of 24 counts of fraud.

The new charges stem from the alleged discovery of a GYD$600M fraud at the Ministry while it was under the stewardship of Westford.

Both Westford and Cummings uneasily stood in the prisoners’ dock in Court three of the Georgetown Magistrates’ Court on Monday before Magistrate Judy Latchman where they pleaded not guilty to the indictable charges.

Latchman then set bail at $200,000 for each of the charges and it was later decided that the accused should lodge their travel documents when posting their bail. They were ordered to return to court on 22nd February, 2016.

The 24 charges ,which were ready jointly to the two co-defendants, alleged that between August 2011 and April 2015 they stole GYD$639M from the Government of Guyana.

The money was allegedly stolen in 24 different tranches ranging from $3.4M to $75M in one instance.

Police Prosecutor Bharat Mangru told the court that the duo would prepare cash vouchers for the different amounts and forward the documents to the Office of the President for them to be signed off.

This was done and the money was later paid out, he said. However the monies were supposed to be spent on work in the Guyana’s 10 administrative regions. Mangru explained that police investigations led them to the understanding that none of the monies was spent as relayed by officials in the various regions.

He said the officials “denied that any activities were conducted during that period…there were no documents to show how the money was spent.”

The Prosecutor then objected to bail based on the seriousness of the offence, the amount of money that was involved, the penalty the alleged crime attracts, the possibility of witness tampering and the possibility that the two accused may flee the jurisdiction and not return to court.

However, Boston quickly retorted saying that the accused are currently facing matters in other courts and have not fled.

He also stated that there was nothing preventing the Magistrate from granting bail , pointing out that persons accused of more heinous offences were afforded bail hence his clients should not be denied pre-trial liberty.

Boston further declared that the trial was based on “mickey mouse” charges.

Outside of the courtroom, Westford was led to the police outpost and placed to sit on the bench while her lawyers took the opportunity to further defend their clients.

Boston told reporters that “I know they are 100% innocent of the charges because these monies were lawfully paid out.”

Both Boston and McKay slammed the Prosecutor for “dirty” prosecuting citing the presentation of hearsay in the courtroom. “That is hearsay there is no evidence to support that,” said Boston referring to Mangru’s statement that regional officials had not received any of the monies.

There were also questions of why the Permanent Secretary who authorized the payment was not hauled before the courts along with Westford and Cummings.