GYD$350 million for Specialty Hospital; Fedders-Lloyd yet to complete assessment 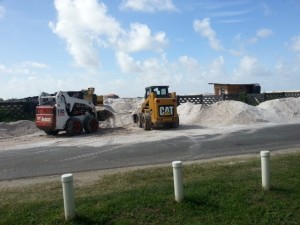 FLASH BACK: Sand being transported to the Specialty Hospital’s worksite, UG Road, Liliendaal.

Ahead of parliamentary approval of GYD$350 million in the National Budget for the construction of the Specialty Hospital, Fedders-Lloyd is yet to complete  an assessment of the works done so far at the worksite by another Indian company whose contract has been scrapped.

The 2016 estimates of expenditure shows that Guyana government has set aside GYD$350 million for thewhich includes mobilization for the construction of the state-of-the-art specialty surgical hospital at Liliendaal, East Coast Demerara.

The bulk of the funding for the construction of the Specialty Hospital will come from a Line of Credit from India. The entire project entails the design, construction and equipping, consultancy services and site development.

Four days before Finance Minister, Winston Jordan presented the National Budget on January 29, 2016, the Public Accounts Committee (PAC) was told that nothing has been done since Fedders Lloyd inked a Memorandum of Understanding (MoU) with government for an assessment of the work done so far by Surendra Engineering.

Permanent Secretary of the Ministry of Public Health, Trevor Thomas told the PAC that “no contract has been awarded” to Fedders-Lloyd, but merely a MoU has been signed by that company to conduct an assessment free of cost. “

Asked by PAC member, Nigel Dharamlall of the opposition People’s Progressive Party Civic  about the status of Fedders-Lloyd’s work, Thomas said, “they might have started but they have not submitted a report as yet.”

The Permanent Secretary of the Public  Health Ministry said the MoU/Letter of Intent is non-binding for construction to go ahead.  “They have not started any work in terms of building the hospital and the Letter of Intent/Memorandum of Understanding does not authorize work to go on, work to start,” he said. “There is nothing in the document that even commits government to make an award to Fedders-Lloyd,” he said.

But  Fedders-Lloyd expects to win the award to construct the hospital after the assessment is completed. “Fedders Lloyd in entering this MOU with the Government of Guyana (GOG) will review the works already started; conclude a design of the Hospital that is acceptable to the GOG; and commit to fully equip the facility on completion of its construction. Fedders Lloyd also undertakes to commence work on the facility immediately following the signing of the MOU,” said the ministry.

Work on the Specialty Hospital was halted after allegations of impropriety and fraud were leveled against the contractor who won the bid for its construction in 2012.

The then government terminated the contract and proceeded to Court to seek remedies. The Court ruled in favour of Government and the construction of the facility came to a standstill. The future of the Line of Credit (LOC) was threatened.

Signed by Finance Minster, Winston Murray and Fedders-Lloyd representative, Ajay Jha in November, 2015; the MoU had sparked off a controversy about whether the company should have been awarded the contract to build the Specialty Hospital since it had been disqualified from the process several years ago.