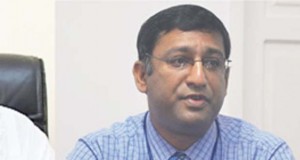 Guyana would ask Canada to extradite the  Guyana Power and Light’s (GPL) former Deputy Chief Executive Officer, Aeshwar Deonarine to answer a charge related to the alleged theft of more than GYD$27 million from the power company.

Minister of Public Security, Khemraj Ramjattan said Guyana has asked the Royal Canadian Mounted Police (RCMP), through the International Police (InterPol), to locate Deonarine and ask if he “could come of his own accord because he is charged here.”

The Minister said if the former number two at GPL refuses t come to Guyana, steps would be taken to extradite him from Canada. “If he doesn’t want to come, well then we are going to start thinking extradition,” he said.

Ramjattan, a former practicing Attorney-at-Law, said Deonarine has the option of challenging the extradition request.

Former GPL Board member, Carville Duncan has been charged with conspiring with Deonarine  to commit a felony between May 7 and 8 at Georgetown- that is to steal GYD$27,757,500, property of that utility company. The money was  a retroactive increase from January, 2013 to June, 2015.

Previous: Ramjattan recalls back-pedaling on no AFC alliance with APNU
Next: GYD$350 million for Specialty Hospital; Fedders-Lloyd yet to complete assessment