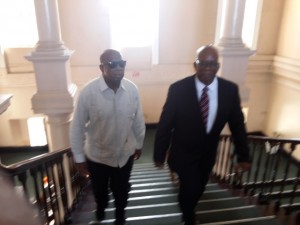 Finance Secretary, Dr. Hector Butts (left) and Finance Minister Winston Jordan make their way to the National Assembly for the presentation of the 2016 National Budget.

Even as government increased the Income Tax threshold from GYD$50,000 to GYD$55,000, it announced that a range of fees would increased.

In relation to public sector wages and salaries, Finance Minister Winston Jordan  did not announce a specific increase in wages and salaries because that would be subjected to negotiations with the trade unions.

They include gun licenses. No specific details were given but FJordan signaled in the 2016 National Budget that huckster, motor vehicle, and operators of rice factories would have to pay more.

Previous: ‘We have one case of Zika’; Gov’t pulling out all preventative steps
Next: Budget 2016: Jordan announces increased subvention for NCN