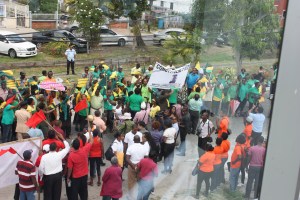 Small parties contesting the Local Government Elections today submitted their lists of Candidates for the Georgetown Municipality all signaling their intentions to take back control of the city from the hands of their much larger political opponents.

At 10:00AM on Tuesday Jan, 26, the small Parties and Independent representatives submitted their Lists to the Office of the Returning Officer at Waterloo Street, Georgetown.

Those smaller parties contesting include Team Benschop, Team Legacy, Healing the National Theocracy Party and a few other independent contestants.

Speaking to Demerara Waves, independent contestant, Mia Ritchie stated that she is not waiting until she is elected to get things done, but rather she is starting now.

“We need a lot of things going on there, lights, play areas sidewalks for school, speed limits…we need… a whole revamp,” said Ritchie contesting in the Lodge Meadowbrook constituency.

“It has been neglected just like everything else over the years…so we have already started petitioning to get certain things done,” she stated.

Ritchie explained that she is a journalist and is also certified in medicine noting that in her past few years she has worked with youths teaching them job skills.

She said she was raised in a “PNC household” and has “campaigned for the APNU+AFC.”

Meanwhile, Team Legacy has expressed some disappointment that the bigger parties have decided to step into the Local Government arena and says that this aspect of governance should have been left for the communities.

Team Legacy representative, Malcolm Ferreira explained that the group of individuals will be contesting six constituencies in the Georgetown Municipality.

“One one dutty build dam, We start with our constituencies  that we live in and this could add up to see something bigger,” said Ferreira when questioned about the participation of the larger Parties.

Mark Benschop, one of the first persons in line to submit his Lists of Candidates stated that  Team Benschop is ready to take the reins of Local Government.

Benschop, who has started a campaign in the grassroots level said that central government has to pitch in at some point but there are no plans to increase rates and taxes in the first year.

“We have persons who are living in residential areas and then they wake up and there is a parking lot in their area without any form of consultation,” he stated.

He plans to conduct a comprehensive audit at City Hall.

Representatives of the PPP and APNU+AFC and Youths for Local Government Elections (YFLG) also submitted their lists at the Office of the Returning Officer.