Differences over whether big parties should contest Local Govt Elections 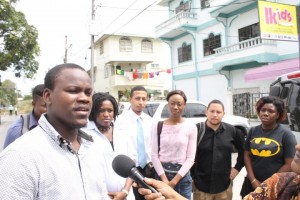 Clayon Halley of Youths for Local Government briefing the media in the presence of other candidates.

General Secretary of the People’s National Congress Reform (PNCR), Oscar Clarke Tuesday – Nomination Day- rubbished suggestions that the old faces should step aside and that the big parties should not have contested the upcoming Local Government Elections (LGE).

“One of the disadvantages will be that the smaller groups may not have the capacity to get the information, to get the people, to bring them out in large numbers,” he told Demerara Waves Online News.

Clarke argued that small parties do not have the capacity to get people to vote especially because of weaknesses in the Guyana Elections Commission’s (GECOM) voter education programme.

On the issue of well-known city politicians like Patricia Chase-Green running for office at the March 18 Local Government Elections instead of a group of brand new faces,  Clarke said the youths require support from experienced persons. “If you forget the past, you will have to relive it! There will be people who have to bring experience to bear on the new council. You call them old but I am calling them experienced councilors…and they will guide the youth who will be there.

“The youth will obviously have more energy but they will need the guidance of those who have been there before,” he said. Clarke’s PNCR is the largest party in the APNU+AFC coalition. 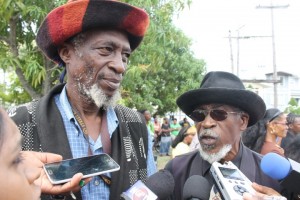 But Youths For Local Government (YFLG)- many of them associated with APNU+AFC- prefers to make its own mistakes rather than being chaperoned and coached. “Mr. Clarke should look back to when he was young and I am quite sure he got involved from a young age and he was allowed to make mistakes and be corrected and he didn’t just grow up old and started to function. Not disrespecting age, but young people must be given a platform and a chance to function and like he would have gotten his chance way back when, now this is the time for the young people to get their chance,” said Clayon Halley.

Halley said there is a risk that the smaller parties would be dominated by their larger counterparts because they have greater access to resources, while there would be instances in which the big parties would have selected persons who are not favoured by some communities. “It’s now for us to prove that we can trump that so I think when it happens a lot of the citizens in Georgetown will be surprised that the small axe cuts down the big trees,”  he said. 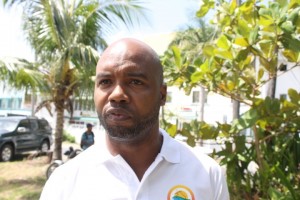 Team Legacy, which would be contesting six constituencies in Georgetown opposes the participation of the larger political parties at the constituency level because it is the residents who are aware of some of their needs such as improved drainage, education and recreation.

“I think the consensus on the ground among the populace is that they don’t want to give the power to the bigger parties at the neighbourhood level,” said Saiku Andrews, a Team Legacy candidate.

The Healing The Nation Theocracy Party (HTNTP) is also not worried about splitting the votes of either the People’s Progressive Party Civic or APNU+AFC because in the first place they should not have been contesting the LGE being held for the first time since 1994. “The major parties had no right in this Local Government Election. They had no right to put their hand in this Local Government Election. This is for regular people out there. They already spring and are high already. Why they want to come and dominate everything? That’s domination!,” he said.