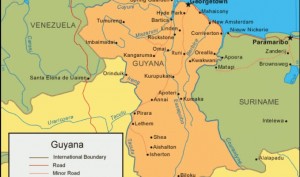 He said Suriname’s Ambassador to Guyana has been already summoned to the Foreign Ministry about reports that the Guyanese Indigenous Indians at Orealla were being taxed at least GYD$10,000 to fish in the Corentyne River.

A number of the Indians has been recently released from the custody of Surinamese Coast Guard.

Harmon told Demerara Waves Online News late Tuesday night that Guyana would be registering its objection to ensure that its rights under international law are protected.

The Minister of State said the matter would be further addressed by Foreign Affairs Minister, Carl Greenidge when he returns from meeting in Ecuador. “There are wider issues of the use of the river that we have to deal with so the question of Orealla and the Amerindian people is one aspect of how the Surinamese have been treating with that river,” he said.

Harmon said fishermen were being pulled in and their passports and identification cards demanded.

With Suriname in the throes of a severe economic crisis, which has resulted in that eastern South American neighbour asking the World Bank for help, Harmon said Surinamese personnel appeared bent on exploring all available means to earn a quick dollar. “You can’t now impose almost a tax on them for that because that is what it amounts to,” he said.

The Minister of State said the encounters between the Indigenous Indians and the Surinamese Coast Guard have been reported to the Ministry of Indigenous Peoples.

Guyana Empowered People’s Action Network (GEPAN) says several Arawaks, who were fishing in the Corentyne River, were detained earlier this month by Surinamese Coast Guard personnel and returned the following day after they were warned against doing so again.

GEPAN President, Anna Correia has since written to Foreign Minister Greenidge detailing the incident as was related to her by former Toshao (Village Chief), Flloyd Edwards. “A group of villagers were fishing during the course of last week on the Corentyne River when they were stopped by the Surinamese Patrol and taken to Suriname where they were detained for several hours. Their families were not informed of the arrest and they were only able to return after having overnighted in Suriname. Attempts from the fishermen to explain to the patrol that they are Amerindians from Orealla who have strong ties with their Surinamese Arawak cousins of Apura, proved futile,”  states the letter dated January 26, 2016.