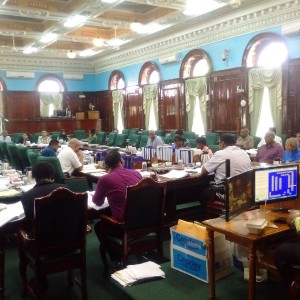 The Public Accounts Committee of the National Assembly in session on Monday, January 25, 2016.

A serious drug shortage has hit Guyana’s public health sector countrywide because of insufficient funds at the Georgetown Public Hospital Corporation (GPHC) and the incapability of the 10 administrative regions to buy their own supplies after the 2015 National Budget was passed in August last year.

This was told Monday to the National Assembly’s Public Accounts Committee (PAC) by top officials of the GPHC and the Ministry of Public Health.

In the case of health facilities across the 10 Regional Administrations, Permanent Secretary of the Ministry of Health, Trevor Thomas  told the PAC that they returned a total of GYD$600 million at the end of last year because they were unable to purchase drugs at the regional level.

Thomas said the major problem appeared to be the fact that most of the Regional Health Officers are recently trained doctors with less than five years experience and were not equipped with the required administrative skills to deal with drug purchases. The 10-month old coalition government last year decided to decentralize drug purchases, but Thomas said the monies and lists of drugs that should have been procured were returned in December, 2015. He added that a number of regions told him that they were only able to collect their monies as late as October or December, 2015.

Despite the constraints, the Permanent Secretary of the Ministry of Health told the PAC that the decentralized purchasing system should not be abandoned at this stage but it should be given some more time. “I believe that every system should be given a fair chance to work,” he said. Thomas further recommended close coordination among the Ministries of Health, Communities- which is responsible for the Regional Executive Officers -and Finance. Another possible solution, he said, was a request for the Director of Regional Health Services to formally request from Regional Health Officers to provide a list of the “critical and short” drugs to decide how to address the issue.

Juan Edghill, representing the People’s Progressive Party Civic on the PAC, lamented that “six hundred million dollars of medical services were not given to the people of Guyana because of gross neglect by accounting officers to discharge their responsibilities in a timely manner.”

“To compound this problem is the present shortage that exists countrywide when there was no shortage of money. I could understand shortage if there was no money but now when there is money and people are suffering, I have a concern with that,” he said.

Across at the GPHC,  Chief Executive Officer, Allan Johnson said cash-flow problems at that health care institution has resulted in a shortage of drugs after having  sought to regularize supplies with a short shelf-life. “We also purchase a lot of our drugs with short shelf life, indeed, because we purchase our drugs from New GPC (Guyana Pharmaceutical Corporation) and we store our drugs at New GPC also because we don’t have any storehouse,” said Johnson.

Johnson explained to the PAC that he has stopped the contract with New GPC, which has been sending drugs that the GPHC does not need, and he had made efforts to order drugs for December and January to help bring the supply of drugs back on track.

He said a budget was submitted to the Finance Ministry since October, 2015 but there has been no response.

PAC Chairman, Irfaan Ali instructed the GPHC’s boss to meet with Finance Secretary Dr. Hector Butts on Tuesday to ascertain how the health care institution could access one-twelfth of last year’s budget to purchase drugs ahead of the 2016 National Budget to be presented on Friday. Ali said it would take much longer to await the passage of the 2016 budget this month before going through the lengthy process of tendering and procurement which would result.

Yvonne Bullen told the PAC that since she was appointed GPHC’s Pharmacy Administrator in October, 2015, she observed that the drugs being supplied to that health care institution had a shelf life as short as four months and large amounts of some drugs were being supplied more than that hospital required.

“Drugs were received with expiry dates as low as four months. Some of them seem to be inflated….There are other cases where drugs were ordered that were not even on the hospital formulary,” she said. Bullen recalled that some time ago 220,000 tablets were ordered but when the consignment arrived, it was six million tablets.

Bullen the GPC currently does not have aspirin, paracetamol, B-complex and some antibiotics. “It’s critical. These are some of the drugs that we need,” she said, adding that there are other drugs to treat kidney transplant recipients and cancer patients. “We do not get supplies in adequate quantities,” she added. According to a list circulated to PAC members, 68 of the 186 items needed are classified as “important.”

Government back-bencher for Region 10, Jermaine Figuiera expressed grave concern about the way the procurement process for drugs was being handled and urged the authorities to take remedial action. “There is definitely a problem that exists with regards to how we manage the operations of the Georgetown Public Hospital and I think some serious approach needs to be meted out to curb this unfortunate situation,” he said.

The GPHC’s CEO said the institution’s pharmacist has advised him that a former top official there had been in the practice of inflating lists of drug supplies whenever she had submitted hers. He said the GHPC’s bond has a lot of items that the hospital would never use.

The PPP’s Edghill called on the PAC to endorse his call for an immediate investigation into the running of the Materials Management Unit. “That is the nerve centre to ensure adequate supplies of drugs are there and I will further ask that there be a value for money audit done by the Auditor General’s Office as it relates to this particular matter to see what is going on,” said Edghill, a former Junior Finance Minister.