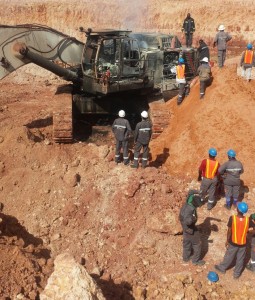 Investigations are continuing into a fire that destroyed a multi-million Guyana dollar excavator at RUSAL’s mining operations at Kurubuku last week, sources said.

So far the probe has revealed that the fuel line leaked, resulting in the flammable substance coming into contact with the engine.

The excavator is said to be worth almost US$1 million.

RUSAL has been expanding the mining of ore in the Upper Berbice area, although world prices for bauxite continue to be depressed.

The company continues to resist attempts by the Guyana Bauxite and General Workers Union (GB&GWU) to reinstate more than 50 workers who had been laid off several years ago during a disruptive industrial unrest for higher wages and better working conditions.

The Ministry of Social Protection, which is responsible for labour relations, is yet to take the required legal steps to refer the issue to arbitration. An effort to do so by the previous People’s Progressive Party Civic administration was unsuccessful.