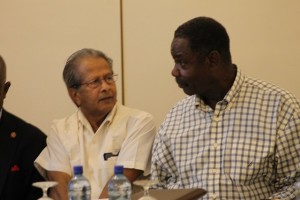 The Guyana Trades Union Congress Sunday called on government to stop giving lip-service to social cohesion and the constitutional right to participatory decision-making and instead hold wide-ranging consultations with sugar workers and the community of Wales about plans to close the sugar estate there.

“Consistent with Article 13 there cannot be a plan for any community without the involvement of the people and their representatives. The rule of law must be respected at all times. It is the rule of that would ensure the sought-after social cohesion and national unity, and successfully arrest the lust of those who thrive on the society being divided,” said GTUC General Secretary, Lincoln Lewis in a statement.

General Secretary of the Guyana Agricultural and General Workers Union (GAWU), Seepaul Narine said he was unaware  of any invitation by government to hold talks but his workers’ organisation would be keen on having such talks.   “There must be discussion and consultation…The decision in my mind is hasty and I don’t think all the considerations were given because there has  been no consultation with the union and the workers,” he told Demerara Waves Online News.

Article 13 of  Guyana’s Constitution says “The principal objective of the political system of the state is to establish an inclusionary democracy by providing increasing opportunities for the participation of citizens, and their organizations in the management and decision making processes of the State, with particular emphasis on those areas of decision making that directly affect their wellbeing.”

Lewis called on Minister of State, Joseph Harmon and Agriculture Minister, Noel Holder to cease crafting a plan for Wales and meet with the community and its representatives.

Noting that Region Three- West Demerara  and Essequibo Islands- was won by the People’s Progressive Party Civic (PPPC) at the May 11, 2015 general and regional elections, the top GTUC official argued that the closure of the Wales Estate by year-end “borders on national interest” and so there should be broad-based consultations at all levels to minimize any fall-out from the closure of the estate.

“Since the closure of the estate will impact on a number of workers/citizens and communities it requires the involvement of the affected stakeholders and central government working towards alternative programme to cushion the impact that will be created,” he said. Among the entities that Lewis  wants to be consulted are the Region Three Democratic Council, the Guyana Agricultural and General Workers Union (GAWU) and the National Association of Agricultural Commercial and Industrial Employees (NAACIE), the Neighbourhood Democratic Councils in Region Three, central government, cane farmers, and the People’s Progressive Party (PPP). 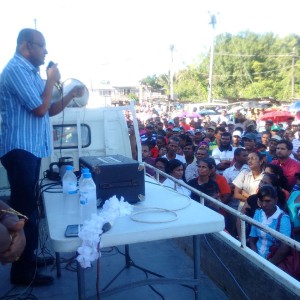 Opposition Leader, Bharrat Jagdeo pledging his People’s Progressive Party Civic’s solidarity to the Wales Sugar Estate workers following government’s announcement that the estate and factory would be closed in October, 2016.

Also being recommended by the GTUC boss is a parliamentary debate on the Guyana Sugar Corporation’s Commission of Inquiry Report.

He said since government’s announcement of the closure of Wales Estate, that move has helped to polarize the country at a time when government has been pushing its social cohesion agenda. “As the APNU+AFC government sees social cohesion as vital to this nation’s development, evident in the establishment of a ministry expected to pursue this policy with laser beam attention, it is time the government not only talk the talk but walk the walk.”

“The manner in which the announcement of the Wales proposed closure was made has contributed to polarisation in the society and this will deepen and widen if a process is not arrived at to bring stakeholders to the decision-making table. Doing this is not only consistent with the rule of law but would also prevent a very serious issue from further becoming a political football by the self-serving and pushing this nation into camps on a matter that should be a unifier,” he said.

The PPP has accused government of being vindictive to persons who have not voted for the APNU+AFC coalition and has warned about organising street protests to force government to reverse its decision to close the estate on the West Bank Demerara.

He chided the coalition administration for handling the Wales issue poorly, saying that it was reminiscent of what then President Bharrat Jadgeo had done to bauxite workers who heard through the media that they will be made redundant (i.e. sent home) and that LINMINE and BERMINE would be divested.