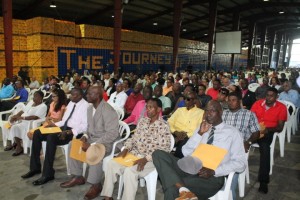 The Chairman of the Board of Directors of Banks DIH Limited, Clifford Reis Saturday evening defended the sale of the company’s shares in Banks Holdings Barbados to SLU Beverages, a subsidiary of Brazil’s Ambev, saying it was a wise business decision.

One of the written questions posed at the company’s 60th Annual General Meeting held at Thirst Park was why shareholders’ approval was not sought to sell the shares. Responding, Reis said the Board of Directors was legally empowered by the company’s articles and the Companies Act to sell any bonds, debentures or securities as it may think fit and proper in the company’s best interest. “It was an investment, the company sold it, we made a profit and today we are sharing half of that profit with the shareholders,” he said.

He explained that Banks DIH’s shares in Banks Holdings Barbados were sold on December 2, 2015 for GYD$4.3 billion on the Barbados Stock Exchange- more than they were originally bought for. Reis announced that Banks DIH’s Board of Directors Friday night agreed that GYD$600 million or 50 percent of the income earned from the sale of those shares to SLU Beverages should be paid to shareholders.

He said the relationship between Banks DIH and SLU Beverages could lead to better marketing of each other’s products.

The Managing Director of Banks DIH pointed out that Ambev owns trademarks for 20 beers and other malt beverages with its operations spanning the Americas, Europe and the Pacifica. The brands of beer include Budweiser, Corona , Bud Light and Skol which, he said,are already well-known in Guyana and the Caribbean.

Banks DIH hopes that it would be able to market some of its products by taking advantage of  Ambev’s commercial channels. “The commercial benefits that will accrue to Banks DIH Ltd will include but not limited to a greater market export and market share of the Banks brand outside of Guyana,” he said.

Reis is also eyeing the possibility of accessing technical and marketing training as well as Banks DIH’s bottling one of Ambev’s beers in Guyana. “There are opportunities for having a bottling agreement for manufacturing one of those Ambev brands…We have a new brewery so it is a good opportunity. Maybe  we can have an agreement to bottle one of those brands,” he said.

Responding to an oral question by one shareholder about whether Banks DIH would sold, he said “Banks Guyana is not up for sale,” to mild applause by shareholders.

The company registered an after-tax profit of GYD$2.569 billion compared to GYD$2.265 billion in 2014, an increase of about GYD$304 million or 13 percent. “This improvement was as a result of the increase in physical sales by 3%, an increase in revenue by 4% and a reduction in operational expenses by 4% due to internal  efficiency measures and favourable material prices,” the Chairman said in his report.