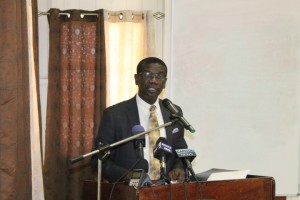 But Sattaur Friday denied revealing taxpayer data, saying that he had been cooperating with an Ambassador concerning alleged improprieties by an embassy staff. “Mr. Lucas has misrepresented significantly what I said to the Board and what I would have responded to him about what I have in my possession and I find his statements, because he is a professional person like me, to be most distasteful and offensive and I will take it up with my lawyers,” Sattaur told Demerara Waves Online News.

The outgoing Commissioner General  also denied being in possession of  data because the safe was empty and all of the back-up  data had been moved to another undisclosed information  more than five years ago.

The GRA has announced that has decided to sever relations with Sattaur with effect March 1, 2015.

Asked whether Sattaur would be charged, Lucas said the GRA was examining all options and we have not ruled out anything.

Lucas could not say whether the data in the safe has been compromised. He also declined to say to whom the taxpayer information was provided and for what reason. ‎‎

The GRA Board Chairman said ‎ Sattaur breached his oath of office one month before the May 11, 2015 general elections by divulging taxpayer information  to someone without authorisation. Lucas said it had nothing to do with Kaieteur News. ‎

Lucas also told the news conference that Sattaur ‎ had a  GRA safe at his house in possession of ICT which is normally used to store taxpayers’s data.

Another bone of contention is that Sattaur retired in 2011 and then continued to serve as Commissioner of General through an ‘implied contract” while receiving about GYD$12 million in pensions. Lucas described that employment arrangement as “highly irregular.”