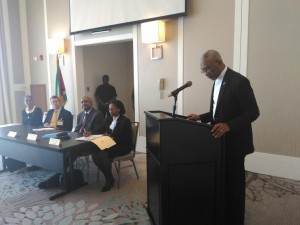 Acting Chancellor of the Judiciary Carl Singh has registered his outrage at the continuing trends in reported domestic violence cases in Guyana and says that these matters need urgent attention.

Singh was at the time speaking at the opening ceremony of a seminar on domestic violence that targeting members of the legal fraternity at the Guyana Marriott on Friday.

According to the Chancellor, headlines with words such as “batter and bludgeoned” now seem to the norm when there are reports of domestic disputes in the local media.

“Our menfolk in particular are going berserk,” he said later adding that “Magistrates should be equipped to deal justly and appropriately with domestic violence matters.”

However, Singh pointed out that while a significant amount of the reported abusers are males, there is also a sizable amount of men being psychologically and physically abused by their female partners hence attentions should be placed on this issue as well.

The career law practitioner pointed out that educating the population regardless of age would definitely redound to the benefit of Guyana as a developing society.

“Violence is not inevitable,” Singh stated.

Meanwhile, President David Granger in the feature address pointed out that Guyana has a deep seethed culture of violence that needs to be addressed as part of the whole solution to domestic violence.

“Violence is not a social necessity it is a human invention aimed at generating and perpetuating domination one person, one group or another,” said President Granger.

The President indicate that the laws alone cannot address the issues of violence in Guyana.

“Laws cannot eradicate the scourge of domestic violence and the secondary outcome…any campaign to eradicate violence must be aimed at changing the deep seethed and culture,” he stated.

“Any campaign to eradicate violence must be aimed at changing the deep seethed cultural attitudes and behavior which have been learnt especially the attitude to equality,” Granger added.

“Guyana seeks to significantly reduce the infamy of domestic violence. This will require a sincere approach to ensure the equality and respect of women, girls and other minorities. It will take time to undo decades of a culture of criminal violence,” said President Granger.

Previous: Guyanese among ID-theft-ring that stole $700 K from New York banks
Next: GRA’s Sattaur fired because he disclosed taxpayer’s info, had data safe at home- Lucas