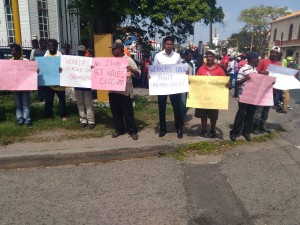 Scores of sugar workers that are attached to the Wales Estate descended on Parliament Buildings on Thursday afternoon in staunch protest of a decision by the Guyana Sugar Company (GuySuCo) to shut down the estate.

They shouted “Don’t Close Wales,” “We need sugar,” “Long live Wales Estate” and “Dont close no estate,” while their placards read “No to the closure of Wales Estate,” “No to Privatisation,” “Workers Unite, “Fight Unemployment,” APNU and AFC betraying sugar workers.”

The march, under the watchful eyes of unarmed police, was peaceful and done behind a police cordon to hammer home their point to government lawmakers that the estate’s closure would have several negative ripple effects.

Demerara Waves spoke to a few of the protesters all of whom expressed dissent with the decision to close the estate at the end of 2016.

“We don’t able to punish. We don’t want estate to close because we have to work and we have children,” said Norma Martin. Ms. Martin worked at the sugar estate for the last 25 years as a weeder and said she would find it difficult to move on now.

“Transportation is close to me…I work a long time there and I feel I shouldn’t go somewhere more far to get a job,” she said. Asked whether the estate being closed at the end of the year would work for her, she stated yes since it would give her enough time to prepare.

“I am satisfied…I don’t mind but once I am still in a job,” she said. Another worker, employed with the company for 25 years also did not agree with the move to close the estate.

Satesh Lakeram said “We don’t want the estate closed. We nah want it close because we don’t have an alternative.” “I feel the President and the Prime Minister should use humanitarian feelings and don’t close the estate,” said Dale Austin.

Protesters were joined by Opposition Leader Bharrat Jagdeo, former President Donald Ramotar and other members of the Opposition. Government has stated that with the closure of the estate all of the workers will be absorbed by neighbouring Uitvlugt.

The workers and the PPP are peeved at the closure of the Wales Estate in another year, saying that would mean that only private cane farmers would be producing.

Government says plans are being made to dig a waterway from Wales to Uitvlugt Factory where the cane would be milled into sugar.

Representative of the Guyana Agricultural and General Workers Union, Sultan Hussain denied claims by government that the century-old factory and estate were an “economic nightmare.”

Hussain, backed by others, said that with some money injected into factory spares, Wales Estate’s production could be improved.

Hussain contended that President David Granger has been fooled into agreeing to the closure of Wales Estate and that he should be invited there to meet with workers to explain to him the true situation.

The PPP has argued that the estate is more than about sugar but is tied to drainage and irrigation for rice farming and other agricultural production as well as other businesses such as transportation, shops and restaurants.