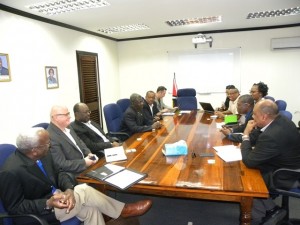 Minister of Public Infrastructure, David Patterson; Minister within the Ministry, Annette Ferguson; and Minister of Natural Resources and the Environment,Raphael Trotman during their engagement with Canada-based company, Greenheart Tree Energy.

A newly-formed Canada-headquartered solar energy company has signed a Letter of Intent with the Guyana government to supply clean electricity, the Chief Executive Officer of Greenheart Tree Energy, Esmonde Klass.

“We were given a letter of interest from Minister (of Public Works David) Patterson and now we are waiting for the bidding process,” he told Demerara Waves Online News.

Klass said , with Greenheart Tree Energy’s more than 150 years in collective business experience, he was confident that the company would get the nod from the National Procurement and Tender Administration Board (NPTAB) to do business in Guyana. “We don’t have a problem. We basically compete right around the world,” he said.

Klass and  group of mainly Canada-based Guyanese entrepreneurs were due to leave Sunday after a one-week fact-finding mission that included talks with top officials of the Guyana Power and Light (GPL), Guyana Energy Agency (GEA), Guyana Water Inc. and the ministers of Finance,  Public Infrastructure and Natural Resources.

The company is interested in setting up solar farms in Bartica, Mahdia, Mabaruma and Lethem- all designated new towns- as well as a solar components factory. “We want to set up a solar components factory, solar farms and an institute to help train Guyanese to acquire the ability to support the solar industry,” Greenheart Tree Energy spokesman, Lindsay Davidson told Demerara Waves Online News.

The CEO said much depended on government signing an agreement to buy power before his company could set up shop in this South American country whose government is pushing renewable energy initiatives. “Enabling in the sense that when you have a Power Purchase Agreement or PPA, one has to ensure that agreement is bankable and by that I mean that any investor that looks at that PPA and say ‘this makes sense, it’s a business’, and that’s the key.

Following the inking of a PPA, he said Greenheart Tree Energy would then search for business opportunities to supply a maximum of 300 megawatts –“more than Guyana could use four or five times over” – at a cost of about US$70 million.

Klass said building such a huge capacity could take a while and so currently the company was examining the possibility of building small solar farms that to supply three to five megawatts that could take as much as seven months to build at a cost of US$3 million to US$4 million.

The company, he said, could provide solar energy solutions to farmers across the country with high quality panels that are manufactured by reputable companies.

Klass said Greenheart Tree Energy was formed less than one year ago in response to President David Granger’s appeal. “It’s a company that we brought together to build specifically for Guyana so if you put them (executives) we have more than a hundred years of experience. This company is built specifically for Guyana,” he said.

Previous: Fire fighters avert blaze at Bank of Guyana
Next: Scott to work “quietly” but workers’ rights will be respected