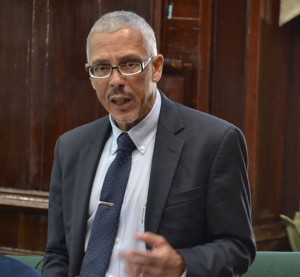 After an enlightening debate and a settlement of several concerns, the National Assembly on Thursday voted to pass the Credit Reporting Amendment Bill that paves the way for Credit Bureaus to access the credit information of consumers.

The Bill presented to the House by Finance Minister Winston Jordan amends eights sections of the principal act that was passed in 2010.

The Opposition People’s Progressive Party supported the passage of the Bill which is the first legislation that the Party has voted in favour of since assuming its role as Opposition last in the 11th Parliament.

Jordan in presenting the Bill stated that it is hoped the Bill would lead to more responsible financial practices.

Speaking on the amendments to the legislation, Shadow Finance Minister Irfaan Ali stated that while he is in support of the amendments, he does not believe that it should be mandatory.

Moreover, Ali stated that Guyana lacks the necessary physical framework for the implementation of such legislation.

“It is necessary that we have the enabling legislative framework that would allow us to compete and function at an effective level…For the credit bureau to function in an effective and efficient manner…we must ensure that the infrastructure that is needed to make good the recommendation is in place and functioning regularly,” said the Former Trade Minister.

He went on to underscore the importance of ensuring that consumers are protected when such legislation is put in place.

Responding to those concerns, Jordan stated that sometimes change is accompanied by fear but this should not be the case relative to the Bill.

“This is sometimes the price you have to pay…some giving away of our so called freedom,” said Jordan explaining that persons have the option of accessing the credit or withholding the information.

Business Minister Dominic Gaskin stated that passage of the Bill would effectively improve Guyana’s rankings on the ‘Doing Business Index.

“Our 2.4% coverage is not enough to score a single point in the dling business index…it is of critical importance that we improve our rankings…the system is not working in Guyana and we are in danger of having our first credit bureau close shop and go home,” said Gaskin.

Opposition Leader Bharrat Jagdeo however opposed this statement saying that “we have a strong resilient financial system.”

He stated “there are other things that are more detrimental inimical to the state of our financial system than the credit reporting bill, nevertheless we support it.”

Guyana’s lone credit bureau Credit Info Guyana has been in existence since July 2013 but has not seen much support given the lack of legislation to support its mandate.

According to the website, the information  is specifically tailored to guide a subscriber through an assessment of the repayment capabilities of a credit applicant by providing a view of the record of repayments on previous as well as current loans.