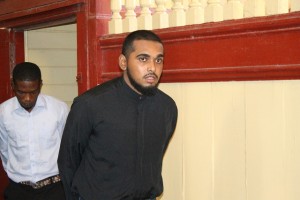 City Magistrate, Judy Latchman adjourned the case until Friday, January 15, 2016  at 10 AM when the duo would appear before Chief  Magistrate Ann Mc Lennan for transfer and the fixture of the next date in the Corentyne Magisterial District.

The Guyana Police Force said three other persons would be charged in connection with the alleged murder of Bernard.

Defence Lawyer, Nigel Hughes expressed concern about the likelihood of his clients getting a fair trial because of the disclosure of some aspects of the police probe.

Responding to a request by Hughes for copies of the prosecution’s statements to be handed over to the defence team,  Police Prosecutor Bharat Mangru said that could not be done now because the investigations were incomplete.

Hughes also asked the court to facilitate access to the scientific data that was used for the purpose of the investigation as the defence team would like those to be sent to an independent laboratory.

Bernard’s body was buried in a shallow grave aback Nurney Village, Corentyne.  The film-maker’s camera and other paraphernalia were also buried nearby.