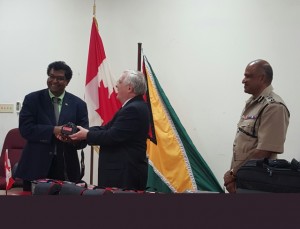 Canada has helped to boost the Guyana Police Force’s capacity to process video surveillance footage, with the donation of more than GYD$3 million in equipment.

“The equipment will enable officers in the newly established Forensic Video Analysis Unit to extract the relevant video footage and enhance images,” the police force said in a statement.

Canada’s High Commissioner to Guyana, Pierre Giroux emphasized the importance of having the necessary tools to implement the knowledge gained through training and highlighted the particular usefulness of the forensic video analysis equipment which will capitalize on the numerous Closed-Circuit Television (CCTV) cameras around Georgetown. High Commissioner Giroux also commended the admirable work of JES, citing personal experience of successful work with JES in El Salvador.

The items, which were presented by  Giroux to Public Security Minister, Khemraj Ramjattan at the Police Officers Training Centre, Eve Leary, include crime scene kits, 6 Canon cameras and an Ocean System hardware and software system is valued at CAD $22,000 (GYD $3,043,280).

Minister Ramjattan reaffirmed the Government’s commitment to strengthening security in Guyana and thanked the Canadian Government and the JES for their timely support in strengthening Guyana’s criminal justice system.

The Government of Canada, through its Anti-Crime Capacity Building Program (ACCBP), is providing CAD $750,000 (GYD $106 million) to Canadian NGO, the Justice Education Society (JES), to implement this project over two years. The project is being implemented in collaboration with the Ministries of Public Security and Legal Affairs, as well as the Office of the Chancellor of the Judiciary, the Office of the Director of Public Prosecutions and the Guyana Police Force.