SOCU representatives did not identify themselves properly before high-speed chase 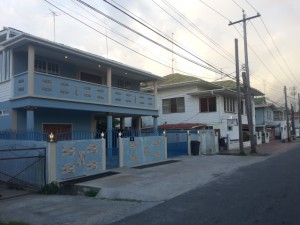 The blue house on Cowan Street where Alana Seebarran and her family live. In the background is the building where NICIL’s CEO, Winston Brassington resides.

Former Miss Guyana India and Miss India Worldwide, Alana Seebarrran has suggested that agents of the Special Organised Crime Unit (SOCU) did not identify themselves  properly when they turned up outside her her home and blocked and banged the car she had entered and even raced after them.

The Guyana Defence Force (GDF) has since confirmed that Sergeant Robert Pyle, who was killed in an accident on December 30, 2015 while on the chase, was on a legitimate operation in support of SOCU.

However, sources have told Demerara Waves Online News that the initial contact was at a bilateral level between a SOCU representative and a low-level GDF officer, instead of the chain of command.

However, Pyle was never instructed to chase after the vehicle but to ensure that the persons targeted remained there until other SOCU operatives arrived.

Demerara Waves Online News was also told that Pyle and his colleague were sent to the stake out the wrong house instead of the one immediately east of Seebarran’s residence where the Head of the National Industrial and Commercial Investments Limited (NICIL), Winston Brassington lives.

SOCU has been tasked with probing alleged fraud at NICIL based on the findings of a forensic audit by former Auditor General, Anand Goolsarran.

In the face of criticisms by the People’s Progressive Party Civic (PPPC) and the Private Sector Commission (PSC), President David Granger has said there was no need for a full probe into the incident. He has also justified the use of the GDF in supporting the work of the police.

“My name is Alana Seebarran, I am a 28 year old mother of one child and the wife of Mr Charles S. Ramson, Attorney at Law and Member of Parliament for the Opposition party I live at 116-117 Cowan Street Kingston.

On the 30* December, 2015, my husband was out of the country so at approximately 8:30p.m., my brother, Raymond Seebarran, drove me in vehicle number PHH8919 to my residence at 116-117 Cowan Street, Kingston, where I went to collect baby supplies for my little child who was left with my parents at their home.

When we arrived at my residence, we did not observe any vehicles parked in the vicinity of my home. My brother assisted me in unlocking the gate and then we entered the yard and proceeded to enter my home through the front door.

I went inside the house with him and I collected the items I needed. We stayed approximately 20 minutes in the house and then we left with the supplies. We exited via the front door and I closed the front door while my brother waited right next to me. We then proceeded to open the gate and observed two men dressed in ordinary/plain clothes standing in the middle of the road directly in front of the house looking at us.

I became concerned about their presence in front of the house and my brother quietly drew it to my attention. I said quietly to him that I also observed them and I was nervous about their presence at this time of the night. We proceeded to lock the gate quickly and moved towards our vehicle when I heard one of them who l observed speaking on a cellphone say, “they’re coming out now., they’re coming out now.’

As we quickly approached our vehicle, one of the men who I do not know said, “can l have a minute of your time?” I became very concerned and nervous, and I said to my brother, “get into the car now!” My brother then said to the man. “you can speak to me through my vehicle window” and he opened his door and got in the car.

The man continued walking towards my side of the vehicle and knocked on the glass and signalled for us to wind the window down.

My brother lowered my passenger side window about two Inches. The man did not show us any form of identification but mumbled that he was from the Special Crime Organization and that “we need you to wait… our boss is on his way.’ I became very scared as the man had no uniform on, never stated his name nor did he show us any identification so I told my brother to drive away.

The man insisted that we must wait and I told him that he could leave a telephone number for my dad to call as I had to get back to my child. My brother tried to get out from there immediately but a white car was blocking us from reversing.

The white car started to move forward to a much tighter position to box us in even more but my brother was, however, able to inch my way out of the parked position on to the road. He then started to drive away heading in a western direction on Cowan Street, immediately, another car, silver in colour, drove out from a parked position on the southern side of Cowan Street and drove in front of us in a perpendicular position blocking our car.

My brother immediately came to a stop and we became even more fearful. A man came out of the same silver car and started to shout at us and bang on our vehicle’s bonnet with his hands. I started to scream for my brother to drive away and he found a small pathway between the trench located on the southern side of the street and the parked silver car and drove away heading west on Cowan Street

As we proceeded on Carifesta Avenue heading towards Vlissengen Road, I noticed that the two vehicles were still behind us and gaining on us.

I then noticed the white car move towards the southern side of the carriageway to try to overtake us but there was another vehicle which was immediately in front of us in our lane so the white car could not complete the manoeuvre.

After we passed the car which was immediately in front of us, the white car again moved towards the southern side of the carriageway and drove along side of us when I felt an impact on the vehicle in the vicinity of the right front wheel area and observed that the white vehicle then careened on the southern side of the carriageway when I heard what sounded like a loud collision.

I was still scared and told my brother not to stop and that we must go right away to the Kitty Police Station as my father suggested. We then drove to the junction of Carifesta Avenue and Vlissengen Road and we made a right turn on to Vlissengen Road.

As we were there, one of the officers informed us that he overheard on the radio that a lady also made a complaint about the white vehicle almost running her off the road on Carifesta Avenue. The officers then told us that the accident occurred in the Alberttown district, and because of this, we had to go to the Alberttown Police Station.

As we got to the Alberttown Police Station, my brother made a report to the police officers about what had happened, and then they told us we were free to go home, and my brother begged the Police Sergeant to escort us home, which he did.

On the same night, my father told us that he received a telephone call from the Alberttown Police Station who requested that my brother should report back to them with the vehicle he was driving.

I shortly thereafter learned through the media which was confirmed by the police that the driver of the white car was a GDF officer named Robert Pyle.’