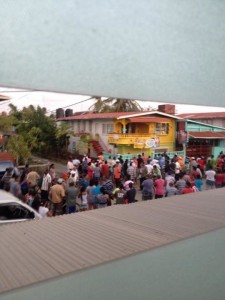 The house at Bush Lot, West Coast Berbice where the couple was killed.

Four men were Saturday arrested in Bush Lot Village, West Coast Berbice in connection with the killing of a businessman and his reputed wife hours earlier

Dead are Arthur Doodnauth Rajkumar, 81 years, and his reputed wife Diane Chamanlall who is in her 40s.

The incident occurred at Middle Dam at about 3 AM.

Police said that acting on a report received police ranks went to the home and as they approached the building three men were seen jumping over a fence on the premises. The police gave chase but the men managed to escape.

Upon checking the house which was ransacked, the ranks found businessman Rajkumar and Chamanlall with multiple chop wounds about their bodies. They were taken to the Fort Wellington Hospital where Rajkumar was pronounced dead on arrival and Chamanlall succumbed while receiving medical attention.

Four men have been arrested and are in police custody assisting with the investigations.

Head of the Criminal Investigations Department, Senior Superintendent Wendell Blanhum told Demerara Waves Online News that one of the suspects was caught while washing blood from his body.

Blanhum said robbery appeared to be the motive. He said police responded promptly to a report but the  men fled the scene leaving behind several items, including cigarettes, packed up to be carted off.