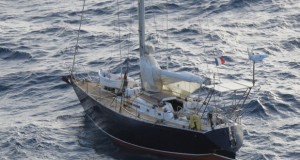 Commander of the Guyana Defence Force (GDF) Coast Guard, Gary Beaton confirmed that the vessel arrived at Coast Guard headquarters at about 8:15 AM.

Demerara Waves Online News was told that French investigators were expected in Guyana to work along with their local counterparts.

Police said the dead man’s passport has been found aboard the vessel named Allegro.

An ocean going vessel spotted the yacht adrift about 200 miles off Guyana’s coast and alerted Guyanese authorities who immediately embarked on a recovery operation.