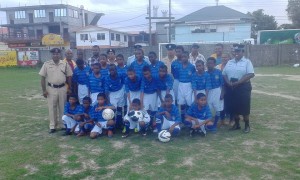 The Guyana Police Force (GPF) has spearheaded the establishment of an Under 15 football team in Bartica as part of its Social Crime Prevention Programme, that law enforcement agency said in a statement.

Twenty-five youths were Wednesday, January 6, 2016 identified by Commander ‘F’ Division Senior Superintendent Ravindradat Budhram and ranks to be part of the team.

“The objective of this initiative is to develop the skills of youths between the ages of 13-15 in this sport and instilling the importance of discipline, fitness, healthy lifestyles, staying away from drugs and meaningfully occupying their spare time in the community through sports,” said the police force in a statement.

The GPF said the name of the team is the Kaleidoscope Football Club and its members will be exposed to training and practice matches under football coach Mr. Elvis Jones.

“This initiative is expected to develop a stronger relationship between members of the public and the police, thereby creating safer communities where the responsibility of crime fighting is shared,” said the police force in a statement.