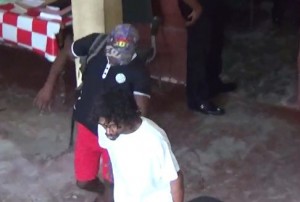 A man Thursday admitted that he took out his penis and dry-humped a woman as well as damaged a door at the City Constabulary’s Bourda Outpost.

After the charges were read to him by City Magistrate Alex Moore, the accused told the court why he committed the offences. One of the charges state that on January 5, 2016 at the City Constabulary Outpost, Georgetown, he damaged one wooden door valued GYD$10,000, property of the Mayor and City Council.

In his explanation, Singh told the court that he needed to heat up a tennis roll and so decided to use his penis to do so. In relation to the indecent assault charge, the Court was told that Singh dry humped Mc Almont.