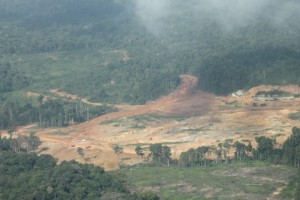 During the month of December, the mill processed an average of 4,758 tonnes of ore per day, of which in excess of 50% of the ore processed was composed of hard rock, at an average head grade of 3.24 grams per tonne gold (“g/t Au”) (above average) and gold recoveries averaged 90.4%.

As a result of 2015 mine and mill production rates, the Company’s Aurora Gold Mine has achieved commercial production effectiveJanuary 1, 2016.

Scott A. Caldwell, President & CEO, states, “I would like to thank the entire team on our significant milestone of achieving production guidance for 2015. We have successfully ramped up Aurora and the hard rock is processing nicely through the primary crusher. We look forward to the next few quarters and demonstrating continued production success to reinforce our successful ramp-up to full production.”

GGI has, on deposit with its lenders, an untouched US$27M overrun facility which is comprised of the Company’s own restricted cash. The lender’s supplied overrun facility of US$25M (see press release dated June 9, 2014) expired on November 30, 2015 due to un-withdrawn funds under the terms of the lending documents.

GGI plans to issue an updated NI 43-101 Technical Report Feasibility Study for the Aurora Gold Mine in January which will reflect an extended open pit mining scenario while deferring the underground production until later in the mine life, as well as, updated cost parameters and reserves based on a US$1,000 per ounce gold price.

Guyana Goldfields Inc. is a Canadian based company, focused on the exploration and development of gold deposits in Guyana,South America. GGI is an emerging gold producer with the onset of its 100% owned Aurora Gold Mine which achieved first production in mid-2015. The Aurora Gold Mine has a total gold resource of 6.54 million ounces in the measured and indicated categories (62.83 million tonnes at 3.24 g/t Au) as well as an additional 1.82 million ounces in the inferred category (16.93 million tonnes at 3.34 g/t Au).  For further details, please refer to the press release dated December 9, 2013 and the report entitled “NI 43-101 Technical Report, Updated Feasibility Study – Aurora Gold Project” dated January 29, 2013 available on SEDAR at www.sedar.com.

Previous: Digicel Business achieves gold certification in the Caribbean
Next: “The police has to answer, the GDF has to answer” – Teixeira weighs in on “sinister” recon mission