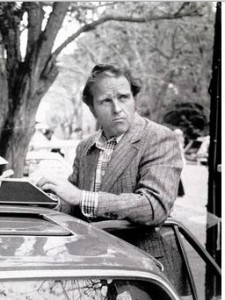 Reproduced from the Los Angeles Times

Robert Flick was a newsman who could have passed for a barroom bouncer.

And standing on the tarmac of an airfield in Port Kaituma, Guyana, on Nov. 18, 1978, moments after a massacre-style shooting by followers of cult leader Jim Jones, he appeared the image of toughness:

“I don’t think he would have moved if a tank had come down that airstrip,” recalled journalist Ron Javers, another survivor, describing the scene in his later book about Jonestown.

But the episode — an early chapter in what would prove to be one of the most horrifying news events in modern history — did not leave Flick feeling tough.

cameraman Robert Brown — in the attack that also killed U.S. Rep. Leo Ryan and two others. After surveying the wounded and helping those he could to safety, Flick hid in the jungle and was able to get a plane out the next day.

He made it to Puerto Rico, where he filed one of the earliest first-hand reports on the now notorious Jonestown episode. Then he went home to endure the aftermath.

At the time of his escape, there were only vague news reports suggesting that perhaps 200 of Jones’ followers had committed suicide at his Guyana commune. Observers assumed that hundreds of others who were missing must have run away.

The chilling truth would emerge later: More than 900 Americans died in the mass murder-suicide of Jones followers.

Flick was deeply affected by the tragedy, and it changed the course of what had been a soaring career. Within a few years, he left NBC “Nightly News,” where he had been West Coast producer and took a job that seemed a strange fit for a hard-news veteran.

He became coordinating producer of a new show, “Entertainment Tonight.” Along with director Steve Hirsen, Flick played a founding role in a new kind of celebrity-tabloid journalism just gathering steam. “Both of us came out of hard news and went to the devil,” Hirsen recalled.

Flick died Dec. 31 at a Pasadena hospital after injuring his head in a fall, said his wife, Shirley Flick. He was 84.

He was “a legendary character,” among journalists, said Joe Saltzman, a USC professor and former colleague. “I’d been to USC and Columbia Journalism School, but I never learned as much there as I did from Bob Flick.”

Robert White Flick was born Sept. 5, 1931, in Indianapolis to Lucile White and Corb Flick, a career Air Force man. He attended college but never graduated. He married Shirley in 1956.

In the late 1950s, Pete Noyes, a longtime local journalist, gave Flick his first reporting job with City New Service. “He impressed me as a guy who could come in and ask tough questions and wasn’t intimidated by anyone,” Noyes said.

Flick was quickly distinguished for brash wit. Noyes recalled learning while at dinner one night that his young hire had written an entire story in Shakespearean English and sent it out on the wire.

Noyes was furious. But shortly after, he said, the piece was read verbatim on a local news-radio station.

Flick went on to work at United Press International, the local NBC affiliate and then for the network. He specialized in tough assignments few others wanted. He was struck on the head covering riots in Watts and Berkeley in the 1960s. His wife said he covered the kidnapping of newspaper heiress Patty Hearst and the seizure of a school bus full of children and a driver in Chowchilla in 1976. He traveled frequently.

Then in 1978, he joined a large group of journalists, officials and family members accompanying Ryan to Guyana to investigate reports that Jones’ followers were being abused. The visit grew tense as Jones denied the allegations.

It became frightening as a number of Jonestown residents attempted to escape and return with Ryan to the United States.

As the group converged on the airfield on Nov. 18, 1978, people assumed to be Jones’ followers attacked from a flatbed truck, shooting scores of rounds and killing some victims execution-style, witnesses said. Flick saw Ryan killed; his two colleagues kept filming. They and San Francisco Examiner photographer Greg Robinson were killed.

Flick later said he was standing by the nose of a plane when shots rang out and he ran, dived “and just rolled away.” The wounded included a fourth NBC colleague and Rep.Jackie Speier (D-Hillsborough), who was then an aide to Ryan.

Flick testified at the federal trial of one man charged in connection with the massacre and attended various memorials. But the experience left him disenchanted. Times writer Howard Rosenberg, who compared Flick to a bouncer, called him “an action man, a big commanding burly bear of a guy” but also detailed the toll Jonestown had taken on him. He wrote that Flick suffered depression and no longer wanted to cover far-flung stories of tragedy.

“He was so totally beaten, so devastated by what happened,” Saltzman recalled. “This experience had just taken the heart and soul out of him.”

Saltzman helped him get the job at “Entertainment Tonight” in 1981 where he remained until 1997. His sharp wit and news skills were a natural fit for the show, and “he enjoyed doing this very trivial kind of journalism. It didn’t push him into these dark areas,” Saltzman said.

Despite the light nature of the job, Hirsen said Flick remained “a true old-school journalist” who “told it like it is” and worried about upholding journalistic values. He was also an unfailingly kind and generous colleague behind a gruff demeanor, Hirsen said.

Besides his wife, Flick is survived by sons Robert Flick Jr. and Michael Flick of Montrose; daughter Shelley McMahon of Altadena; and two granddaughters. He was preceded in death by grandson Joe McMahon, who was shot and killed in Pasadena last year.