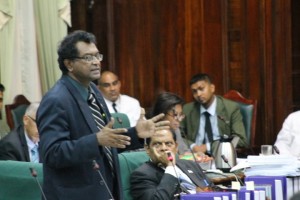 Minister of Public Security, Khemraj Ramjattan addressing the National Assembly during the debate on the Anti-Terrorism and Terrorist-related Activities Bill, 2015.

Government Wednesday night justified the mandatory death penalty and rendition of terrorists and passed the Anti-terrorism and Terrorist-Related Activities Bill, despite concerns by the opposition People’s Progressive Party Civic (PPPC).

PPPC Shadow Minister of Legal Affairs, Anil Nandlall appealed to government to send the “unvarnished” bill to a parliamentary select committee to facilitate proper consultations and arrive at a law with minimum acceptable standards.

In the end, government used its one-seat majority in the 65-seat National Assembly to pass the Bill that would soon be assented by President David Granger.

Declaring that “draconian times require draconian measures,” Minister of Public Security, Khemraj Ramjattan justified the use of the death penalty where terrorists and extremists challenge democratic values and human rights.  Ramjattan, who was the lawyer for a teenager whose genitals had been burnt by police during a murder investigation, acknowledged that human rights and the death penalty were sometimes on a collision course but in the end it is the need to protect the larger good of citizens that prevails. Arguing in favour of the death penalty, he said such a penalty would discourage terrorists from carrying out various acts. “It does affect me personally-the death penalty-I have always argued against it but draconian measures are needed….It has a dissuasive effect, as I said, and that is important because when people feel they could terrorise, in accordance with the provision of this act and will not be hanged, it may not have that preventative, dissuasive effect.

But Nandlall chided government for not taking into consideration the international lobby against the death penalty and that even Guyana had amended its laws to allow for the death penalty only if certain persons such law enforcement personnel are murdered during the course of their duties. “If that is our position, then so be it because we would be sending some very, very strange messages to our people in terms of our legislative agenda and the international community,” he said.

He noted that a number of Caribbean countries, France and Britain, which have similar anti-terrorism laws, do not have the death penalty even as the Bill in Guyana contains the death penalty for 14 terrorist and terrorist-related offences.

Nandlall upbraided Ramjattan for arguing that the death penalty leads to a reduction in crime.

The PPPC’s Shadow Attorney General and Minister of Legal Affairs makes a point in the National Assembly during the debate on the anti-terrorism law.

The Public Security Minister hoped that the new law would help prevent Guyana from becoming a safe haven, train ground or a place where their funds could be easily accessed and for financing terrorist activities.

Backed by laws, Ramjattan said Guyana would be seeking international training assistance; build stronger prisons for terrorists and purchase drones and boats to monitor Guyana’s vast borders through which guns are smuggled from neighbouring Brazil and Venezuela.

The Minister supported the provision in the anti-terrorism law that will allow Guyana to transfer terror suspects to other countries. “Some people feel that we are now doing the wrong thing by going the great leap of rendering.  I believe that sometimes it is necessary that when certain information comes from another country and a person is a suspect and a known one, that the extradition process is an extraordinarily lengthy and so you can do a transfer,” he said.

He noted that Britain has been using rendering, a necessary tool to fight terrorism, and that Guyana should use it.

Nandlall also expressed concern about provisions in the Guyana law that permits the authorities to go the High Court to obtain a  detention order, resulting in legislating the loss of a pre-charge liberty for 72 hours initially and more time afterwards on grounds that it is likely that the person would interfere with a probe into terrorism.

The Attorney General and Minister of Legal Affairs, in wrapping up the debate, said offences such as terrorism would always collide with terrorism. He announced that soon there would be a lot of phone-tapping and surveillance to protect Guyanese from terrorists.

Guyana passed the Interception of Communications Act several years ago to facilitate wire-tapping of telephone conversations through a High Court order.

Previous: GAWU named as major contributor to downfall of GuySuCo
Next: Break-up of Guysuco proposed