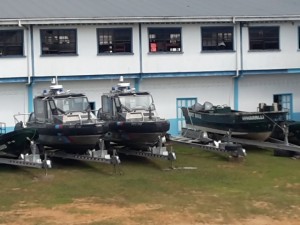 The Guyana Defence Force (GDF) is to acquire another offshore patrol vessel, a decision that has been partly influenced by impending commercial oil production in a deep sea concession, Chief-of-Staff Brigadier Mark Phillips said Thursday.

“I would say that the soon to be drilled well and exploitation itself perhaps would have accelerated the need for the acquisition of more vessels but it is not the only reason,” he said.

Addressing a news conference at the GDF’s Camp Ayanganna Headquarters, he said the GDF was also planning to acquire more aircraft to assist with search and rescue, aerial reconnaissance and monitoring of Guyana’s maritime space.

Phillips could not say specifically when the additional aircraft and vessels would be acquired but said these would be done during the next four years.

Confirmation that the decision to boost the Coast Guard’s capability was partly linked to the development of the offshore oil sector followed previously raised concerns by the Commissioner of the Guyana Geology and Mines Commission, Newell Dennison about the need for greater security offshore.

The current flagship vessel, GDFS Essequibo, is serviceable but Phillips said it was better to have more than one vessel conduct offshore patrols in a sustained manner. “It is imperative that the Coast Guard be capitalized. We had purchased some in-shore vessels but now the focus is on offshore vessels to effectively patrol our EEZ (Exclusive Economic Zone),” he said.

The Chief-of-Staff highlighted the need to patrol Guyana’s  54,000 square kilometre EEZ to protect the fertile fishing grounds from illegal fishers and illegal traffic traversing the waters.

American oil giant, Exxon-Mobil, is advancing preparations to possibly begin oil production at the Liza well in the Stabroek Block in another three years.

Venezuela has since unilaterally extended its maritime boundary to include the area where the significant oil deposit was found earlier this year.

Previous: PPP shuts down recommendation to ‘break-up’ GuySuCo
Next: Computer technician on US visa-related fraud charge