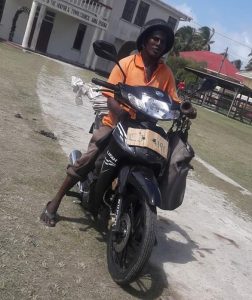 Police say they have arrested four persons as they probe the killing of newspaper vendor, Shawn “Papersman” Mannilall.

Investigators said the 48-year-old businessman of Parcel 61, Queenstown, Essequibo Coast, was shot dead by one of two armed bandits at about 8 o’clock Friday night, January 10, 2020 at his home.

“Initial investigation revealed that the deceased and his family were about to enter their home when they were confronted by two masked men, both wearing helmets and armed with a handgun and a cutlass.

Subsequently, the firearm was discharged hitting Mannilall to his chest, shoulder and right side abdomen causing him to fall after which both men made good their escape,” the Guyana Police Force said.

Mannilall was rushed to the Suddie Public Hospital and was pronounced dead on arrival. The body is currently at the hospital’s mortuary awaiting a postmortem.

Previous: Small parties failed to agree on coalescing
Next: OPINION: These seasonal insults to the Guyanese voter must cease