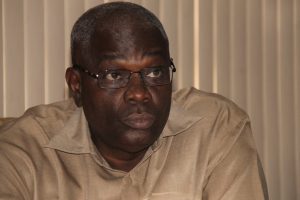 Chief Election Officer, Keith Lowenfield on Tuesday said he would have to conduct an exercise to determine if the voters’ list and, if refreshed, could be used to conduct a free and fair election.

“That’s correct. Always has and always will,” he told reporters when asked if the list, if refreshed, could be used to conduct a free and fair election.

He was at the time exiting the Chief Justice’s courtroom where political commentator, Christopher Ram made an unsuccessful bid for an order to stop the now three-day old house-to-house registration process.

A claims and objections period is an opportunity for persons to be registered in the area where they live and object to the names of others with valid reasons.

Ram is also asking the court to find that the registration process will collide with the constitutional requirement for general elections to be held the latest by September 18, that’s within three months of the Caribbean Court of Justice (CCJ) ruling that last December’s no-confidence motion was validly passed.

Guyana Elections Commission (GECOM) lawyer, Stanley Marcus is on record as having told the CCJ that preparations for an election would be finished by December 25.

Asked to comment on President David Granger’s assertion that the voters’ list is bloated by about 200,000 names, the Chief Election Officer declined to get into the “numbers game” and said “I would have to conduct an exercise”.

“It’s speculative. I will want to do an exercise to determine that amount and that exercise can be done,” he said. He also declined to subscribe to the view that the list was bloated.

That appeared to be in contrast to claims by the People’s National Congress Reform (PNCR) that a GECOM exercise had found the list to be bloated with about 200,000 names and also defective.

The PNCR and Working People’s Alliance (WPA) have backed GECOM’s decision to conduct house-to-house registration from July 20 in order to create a credible voters’ list.

On the issue of whether the list, which expired on April 30, could be used to conduct regional, administrative and national elections, Lowenfield said that would be a decision for a new yet-to-be-appointed GECOM Chairman and the electoral body’s six commissioners.