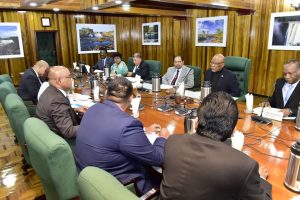 President David Granger Wednesday morning maintained that he could not call an election date unless the “independent” Guyana Elections Commission (GECOM) is ready, and he is expected to meet the seven-member body next week.

“GECOM is in charge of elections, not the Executive. I cannot decide when elections will be held,” he told reporters minutes after meeting Opposition Leader Bharrat Jagdeo at the Ministry of the Presidency.

The Guyanese leader said he would be asking GECOM how much money as well as time it needs to prepare for the conduct of general and regional elections.

After the President assured that there was “no crisis” in Guyana, the Minister of State, Joseph Harmon added that the Guyanese leader could meet with GECOM in another three or four days. “The door is open. The Leader of the Opposition has agreed to meet again. The people of Guyana could be assured that we are working to ensure that credible elections (are held) in as short a time as possible,” he said.

The President confirmed that Jagdeo insisted that he named an election date, but stressed that it was up to GECOM to state its preparedness for the polls. “The President or the executive or any other body cannot intervene, cannot intrude, cannot interfere in the work of GECOM and so we have to allow GECOM to do its work,” he said.

The governing coalition and its three elections commissioners have already stated that the next general elections could not be held without house-too-house registration to remove the names of dead persons and emigrants as well as ensure that persons are registered in their current residence.

“Let me make one thing clear. GECOM is an autonomous, GECOM is an independent agency and there is no part of the constitution which gives the President or the Executive in general authority to interference, intervene or intrude in the work of the election commission,” the President added.

The President has already asked GECOM to prepare for the holding of general elections this year.

Harmon stressed the importance of holding credible elections “and not just any elections that would end up creating more confusion than we solve the problems”.

Opposition Leader Bharrat Jagdeo on Wednesday said he and President David Granger reached no agreement on holding general elections before the current voters list expires on April 30, 2019. “We did not get past the first item on the agenda which is a date for elections,” Jagdeo told reporters.

This means that both men did not arrive at any discussion on extending the life of the government beyond 90 days which expires on March 21 following the passage of the no-confidence motion on December 21, 2018. “I said at this point in time we are not going to extend the life of the government unless there is an agreement to a date that is as credible and close to the constitutional requirement,” Jagdeo added.

Jagdeo said the 55-day deadline he gave the President to hold elections before the current voters’ list expires on April 30 is reasonable. The Opposition Leader said a number of activities such as training and procurement of sensitive election materials can be done over the next 50-odd days.

Jagdeo said he also rejected Granger’s suggestion that they meet jointly with the Guyana Elections Commission.

In light of concerns that the voters’ list is bloated and could lead to electoral fraud, the former Guyanese President said those could be addressed by the government funding three polling agents from the ruling People’s National Congress Reform and A Partnership for National Unity “to sit in every polling place to make sure only people who are eligible to vote, vote so that you don’t have to worry about the quality of the list or padding, etc.”

Two of the government-appointed elections commissioners have said that even if there is an acceptable voters’ list, it would take at least 126 days to conduct all of the other preparations down to polling day.

The Opposition Leader said he would be willing to meet with President Granger again “but it cannot be a date far into the future”. He again accused the government and GECOM of using house-to-house registration as a tactic to delay general elections.

Previous: Guyanese economist Kerwin Charles named Dean of Yale School of Management
Next: Liberty and Justice Party’s Lenox Shuman applies to give up Canadian citizenship, may scrape in Guyanese residency