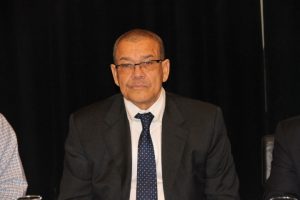 While the Guyana Revenue Authority (GRA) raked in almost GYD$200 billion in taxes last year, it wants the court system to hear a more than 20-year backlog of cases, including one against the Guyana Telephone and Telegraph (GTT) company, GRA Commissioner-General Godfrey Statia said.

Government officials have said GTT wants a US$44 million claim settled before agreeing to formal liberalisation of the telecommunications sector, but Statia denied that the tax agency was responsible for the slothful process. He said the issue has been the subject of discussions between the government and Atlantic Tele-Network (ATN), the United States-based parent company of GTT.

“It has also been the subject of discussion between the government and ATN. To say, however, that the tax cases are what is holding up liberalisation is farther from the truth. We are not holding it up at all. We are dealing strictly with tax principles,” he said.

Statia added that “discussions are actively afoot for it but we have not reached a stage whereby we have yet decided what would be the outcome of those discussions”.

He stressed that the GRA maintains that the taxes, a national asset, are due, but government still legally reserves the right to settle. “We maintain a principled position that these taxes are due. We maintain that if we go to court, we have a fairly good chance of winning and I do not believe that negotiations should centre around taxes. That’s my firm belief. Negotiations should centre around other things that are non-principled in nature but taxation is based on principle,” Statia said.

The Commissioner-General said he has written the Chancellor of the Judiciary, Yonette Cummings-Edwards, asking that the backlog of cases, including the GTT case dating back to 1993, be heard. “We have written to the Chancellor asking them to look at the backlog of our tax cases. You know there are certain cases which are 14, 15 years old, and have not been brought up as yet. We are trying to get our tax cases behind us,” he said.

The cases before the court account for about GYD$15 billion, while cases that have been won are for about GYD$5 billion. He noted that the GRA has been working with taxpayers to settle their liabilities even in cases where the GRA has won but they do not have the monies to pay. “Basically, taking away assets from the taxpayer is a last resort,” he remarked.

Of the almost GYD$200 billion collected last year, the GRA said GYD$15 billion fell into arrears of which GYD$7 billion was as a result of an amnesty.

2019-02-01
Denis Chabrol
Previous: Gail Teixeira likely to give up Canadian citizenship
Next: School of the Nations’ parents, administration want face-to-face answers from police