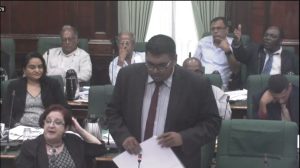 They both refused to comment, instead saying the PPP would issue a statement.

Ali is Chairman of the Public Accounts Committee and Shadow Finance Minister.

He emerged victorious despite serious questions about his academic qualifications and being charged with a GYD$174 million fraud connected to the sale of housing lands to Jagdeo and former PPP Cabinet ministers.