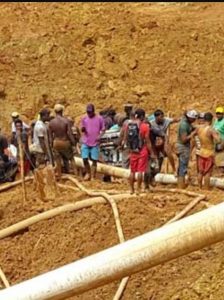 The Guyana government has begun what could turn out to be  a major crackdown on mining practices that have been causing mining pits to cave in and killing miners, the Ministry of Natural Resources indicated.

The Ministry of  Natural Resources Ministry said its Compliance Division’s Corp of Wardens, and the Guyana Geology and Mines Commission have been tasked to “address problems of this nature in the mining areas where there has been an increase in legal and illegal mining activities and accidents.”

Natural Resources Minister, Raphael Trotman decided to order an “immediate enforcement operation” following Monday night’s death of 33-year old Lennox Douglas of Canvas City, Wismar, Linden “due to the caving in of a mining pit in which he was working” at Issano Backdam, Region Seven.

Trotman said the agencies are expected to provide a report upon completion of the operation. The Ministry extends condolences to the relatives of the deceased.

Previously, government had conducted a Commission of Inquiry into unsafe mining practices, but miners continue to die when pits cave in. Some of the pits, experts have said, are constructed in a manner that violates the required standards especially during heavy rainfall when the soil becomes even more unstable.