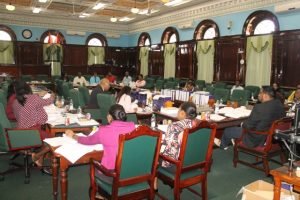 Former Region 10 Regional Executive Office, Gavin Clarke on Monday conceded that the Region had breached Guyana’s Procurement Laws when it issued a number of contracts –contracts that had been flagged in 2016 in his Audit Report.

Contrary to an earlier report, Clarke was never charged with fraud. Demerara Waves retracts that content and apologises unreservedly to Mr. Clarke.

Clarke was among the team of Officers headed by Regional Executive Officer, Orin Gordon and was at the time being grilled by Public Accounts Committee Chairman, Irfaan Ali.

The 14 contracts in question were valued at just over GY$38M and it was found by the Auditor General that the contracts had not been awarded t the lowest or most competitive bidders.

Under cross examination by the PAC Chairman, Clarke told the Committee that not only had the region not awarded the contracts to the lowest bidders but unsuccessful bidders were not notified in order to lodge any protest with the Public Procurement Commission.

Clarke, under questioning, told the PAC that in many instances where technical and administrative requirements had been met by evaluators the contracts were still not handed to the lowest bidders.

He attempted to tell PAC that was done since the Region was of the view that some of the lower evaluated contractors already had work ongoing. None of the unsuccessful bidders was notified which pointed, according to Ali, to another breach of the Procurement Laws.

All of the contracts were found to have been awarded in the last quarter of the year, despite REO Gordon earlier telling the Committee that procurement works had been significantly hampered.

Clarke was further challenged on the accuracy of the information provided to the PAC since documentation proved that the majority of the contracts had been awarded early in the year.

Ali told the House that as such Clarke’s explanation could not hold water. “if the answers are conflicting with the records then we have issue.”

He was adamant the Clarke’s answers were not plausible since to say at the beginning of the year contractors were bogged down and as such could not be awarded contract, is suspicious.

“I am very disappointed in conflict of answers,” Ali said.

As it relates to monies held by the region at the end of 2016, REO Gordon indicated that the Region also breached the Fiscal Management and Accountability Act (FMAA) in retaining money beyond the end of the year.

Asked if he was aware it was a breach to cut cheques and keep beyond the end of the year, Gordon conceded and was pointed to the AG findings that Region 10 had in fact held on to millions.

The identified breaches of the FMAA were found to have reoccurred in that the practice still obtained.

The Committee was told that the money was held onto retention payments for contractors. This position was again challenged by Ali, who reminded the members that retention is in fact catered for in each year budget but the breaches continued.

Asked for an explanation about why the breaches of the FMAA continued into another year, the DREO told the Committee that was due to the late commencement of the project.

She was chided by Committee Member and Minister of Public Health, Volda Lawrence, who was adamant, “when there is a law you can’t arbitrarily make up an excuse for breaking the law.”

According to the Public Health Minister, herself a former PAC Chairman, the explanation was akin to the man who snatches a chain telling the Magistrate he had to buy food for his children.

The PAC heard, too, that the Region 10 Officials were in fact committing even more egregious breaches of the Guyana Laws since cheques for payments were being prepared even before works could be verified.

In other words, cheques were prepared for payment even before works could have been completed by contractors and verified in order to make payments for measured works.

“I do accept mistakes were made, indeed there were some constraints in ensuring that the cheques could not have been paid out,” the Committee heard.