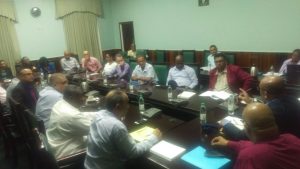 Opposition Leader, Bharrat Jagdeo on Thursday floated the likelihood of legal action if the Guyana Revenue Authority (GRA) is empowered to garnish persons’ bank accounts or block them from travelling if they owe taxes.

“The two that are so fundamental that they warrant public challenges to them maybe in the courts,” Jagdeo told Demerara Waves Online today, are “the ability of the state, [through the GRA], now to go into your account and to garnish your funds to take money from your account to settle a debt that they believe you owe them.”

“The second,” Jagdeo continued, “is the ability of GRA, without a court order, to block you from leaving the country because you owe value added tax.”

The issue was raised with Jagdeo and other top representatives of his People’s Progressive Party (PPP) by a delegation from the business community during a meeting to discuss nominees for the new Chairman of the Guyana Elections Commission (GECOM). The concerns were raised about government’s proposal for new powers in Budget 2017 to be given to the GRA

Finance Minister Winston Jordan during his 2017 budget speech on Monday in the National Assembly proposed an amendment to Section 45 of the Value Added Tax (VAT) Act which required a court order in order to block persons from leaving Guyana once they owed money to the tax collecting agency.

Minister Jordan also proposed an amendment to Section 102 of the Income Tax Act in order to grant that agency the new power of dipping into taxpayers’ personal bank accounts once they owe the agency.

“This provision would assist to improve compliance with demands issued by the GRA for outstanding payments,” Jordan said in his budget speech.

“These go to rights issues,” the Opposition Leader said opposing the proposed amendments, “the sanctity of people’s property, their accounts etc and also the freedom to move.”

Jagdeo said there other other measures to settle tax liabilities including bargaining, and court proceedings which afford the taxpayer an opportunity to respond fairly in court.

“You can’t say ‘OK, we assess you and believe you owe this’, and then behind their back go into their account and take their money or stop them from going out the country,” he added.

Jagdeo’s’ meeting with the private sector this morning was part of a two-day consultation with the public in appointing the next chairperson of the Guyana Elections Commission.

The Opposition Leader said he explained to the private sector that “we are looking for individuals who act impartially or independent, of integrity, and who are courageous to stand up to any attempt on any side to influence them to do anything not within the laws on the conduct of elections.”

The former Guyanese leader met yesterday with the Guyana Trade Union Congress (GTUC). Though he did not divulge much on that meeting, he did say, the GTUC agreed to keep in touch with the Opposition on mutual issues of interest to both sides.

Jagdeo expects a list of 200 or so persons by the end of the consultations, which will later be narrowed down to 6 nominees to be submitted to President David Granger for his consideration. Jagdeo anticipates the six nominees will be presented by the end of this year.

Dr. Steve Surujbally has already tendered his resignation with effect from November 30, 2016, ending a 15-year  tenure at the helm of the elections management authority.