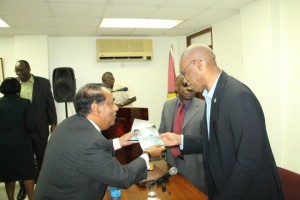 The way is almost clear for Guyana’s Ambassador-designate to Kuwait, Dr. Shamir Ally to present his credentials to authorities there, now that Georgetown has almost finished its probe into his past legal troubles in the United States (US).

Foreign Affairs Minister, Carl Greenidge said Saturday that the probe into Ally’s past legal woes with the United States Securities and Exchange Commission (SEC) has been completed.

“Yes, unless something untoward occurs ,” when asked whether Ally is likely to take up the ambassadorial appointment.  The Foreign Minister confirmed that Ally was yet to complete the accreditation process in Kuwait because of the ongoing work on the issue.

The Foreign Minister said Cabinet has already held one round of talks on the findings and is expected to have a second round.

Back in September, 2016 word surfaced that Ally had been fined several years ago by the SEC, a disclosure that  had caught the government by surprise because he had never disclosed his run-in with that regulatory agency.

The Guyana government had also not known about that during its background check and interviews with its foreign envoys.

The Alliance For Change (AFC), a political party f0r which Ally is an executive member and financier, days later in September said he had never knowingly engaged in fraud in the US.

The AFC has said that Ally’s July 2000 termination ruled out his ability to access the accounting records which would have enabled him to substantially rebut the SEC’s 2002 charge.