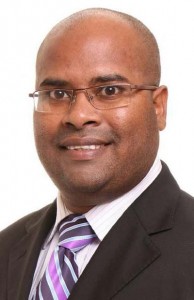 The Prime Minister’s representative on the board of the Guyana National Newspapers Limited (GNNL)- publishers of the Chronicle newspaper-  has been surprisingly elevated to interim chairman of that state-owned media house.

Imran Khan’s appointment was communicated by Prime Minister Moses Nagamootoo to management on October 31, 2016 at a time when there are concerns about the independence of that nine-member policy-making body.

Khan was a candidate for the A Partnership for National Unity+ Alliance For Change (APNU+AFC) coalition in the May 2015 general and regional elections.

Sources observed that independent thinkers such as veteran journalist, Bert Wilkinson and Karen Davis, a public affairs consultant and journalism lecturer, have been bypassed for the position of chairman to replace Jean La Rose who quit after just one year on the job.

La Rose, also an APNU+AFC candidate, had said that she resigned because of increasing opportunities that had become available for her to contribute to the development of Amerindian communities. She had also appeared to signal mild unease about her role as Chairman of the Board. “At this, point I feel I am not contributing to the further development of the board or the GNNL as I may have done if I had more time to dedicate towards fully understanding my role as Chair or as Director,” she had said.

Back in September 2015 when the GNNL and National Communications Network (NCN) boards were appointed, Prime Minister Nagamootoo had said that Khan, Director of Public Information, appears on both boards and will represent him and the interest of the Government.

Khan has since resigned from the NCN Board over the selection and appointment of Lennox Cornette as the state broadcaster’s Chief Executive Officer.

After concerns had been raised about the Prime Minister’s weekly meetings with top editors of the Guyana Chronicle and NCN, he had announced an end to such engagements. However, sources have said that those meeting are still held at which directives are given and concerns are raised about coverage.

The Prime Minister himself has openly raised concerns about aspects of state media coverage, and at one time he had even spoken directly with a parliamentary reporter.

The other board members are candidates -Tabitha Sarabo, Patricia Woolford, Ruel Johnson and Scheherazade Ishoof-Khan- are known APNU+AFC supporters.

2016-11-02
Denis Chabrol
Previous: Use of date-rape drugs on the rise; “When you go out, do not take drinks from people…” DPP warns
Next: Businessmen held with gun, ammo, ganja- police