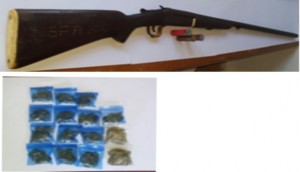 The shotgun, three cartridges and marijuana that police said they found at Omai Landing, Region 8.

Two businessmen from Linden and Diamond, East Bank Demerara were early Wednesday morning taken into custody, after a gun, ammunition and marijuana were allegedly found in their places of business at Omai, Region 8 (Potaro-Siparuni).

Police said one licensed shotgun, three live cartridges and a small quantity of marijuana were found in their places of business, at Omai Landing during separate raids.

The Guyana Police Force said at about 2:30 AM police, acting on information, swooped down on a shop at Omai Landing and conducted a search during which a twelve gauge shotgun and three live cartridges were found.

Investigators said the 59-year old owner of Diamond Housing Scheme, East Bank Demerara, who was present, admitted to ownership of the firearm and ammunition and will appear in court soon.

Half an hour later at 3 AM, police said they went to another shop in the same area and conducted a search during which 29 grams of marijuana were found in small zip-lock packages.

Police said the 49-year old owner who hails from One Mile, Wismar, Linden and who was present, claimed ownership of the illegal substance. He too will appear in court shortly.