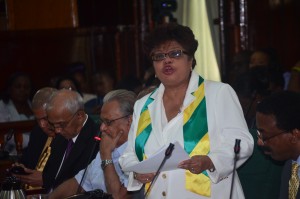 Social Cohesion Minister Amna Ally says that since the APNU+AFC administration took office and established a Ministry of Social Cohesion, notable progress has been made in society with more people lending a hand for the cause.

During an interview with Demerara Waves on Thursday, Ally made the disclosure asserting that the Guyanese public wants to see some amount of cohesion in society.

Ally heads this Ministry which has been dubbed the’ Ministry of Bribery’ by the Opposition People’s Progressive Party.

However, she believes that the work she puts in will yield progress in time.

“A lot of progress has been made as far as I am concerned…the populace out  there want togetherness in Guyana so they are very responsive to our organized forums,” said Ally.

The Minister pointed out that for the most part, events organised by the Ministry have been well attended.

“You are feeling the good response because when you don’t reach them they reach you. That alone tells you that the people out there want social cohesion…it is catching on,” she stated.

As part of its work, the Ministry would soon be rolling out a pilot project targeting secondary schools.

Thirteen schools in Region Three have been selected for the pilot phase of the project.