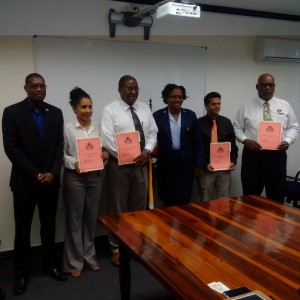 Guyana is currently contemplating joining a list of other Caribbean countries in search of another fuel supplier in order to reduce reliance on Trinidad and Tobago, now that Venezuela’s PetroCaribe has dried up as a fuel sources.

Speaking at the induction of the Board of the Guyana Energy Agency (GEA) on Thursday, Minister of Public Infrastructure, David Patterson said he was aware that several sister Caribbean Community (Caricom)-member states were concerned about the ability of Trinidad and Tobago’s state-oil company to supply the entire region.

“With PetroCaribe the pressure was off but now having them as having Trinidad as the primary source of petroleum for the entire Caribbean…there is a concern by the major bigger countries; they would like a bit more energy security,” he said.

The newly-appointed GEA Board has been tasked with considering a paper by the agency’s Chief Executive Officer, Mahender Sharma to ensure that Guyana has another energy source. “The issue is energy security. You don’t want to be over-reliant on one supplier. Trinidad is serving the entire region now.

From a price competitive perspective, the prices from Venezuela were better, they were lower, Trinidad has its own posting so it is not really referenced to market price so that presents some complications. The prices may be a bit on the higher end but the real issue is security. If the plant shuts down for whatever reason, whether technical or otherwise you want to have options to source fuel,” he said.

Sharma explained that currently Guyana’s 14-day reserve is a bit low and should be increased.

Long before Venezuela stopped selling Guyana fuel under the PetroCaribe agreement, Guyana had been buying 50 percent of its fuel from Trinidad and Tobago. Now that the world oil price has plummeted to US$34.28 per barrel (Thursday’s price), other sister Caricom member-states are no longer benefiting from  Venezuela’s low-interest PetroCaribe deal.

Minister Patterson, who has responsibility for the energy sector, declined to name the countries that have asked Caricom for a waiver of the Common External Tariff (CET) to allow them to but fuels from outside the region.

The CET is a tax that aims to protect Caricom countries from extra-regional competition once companies in the region have have the ability to provide adequate and timely supply at a reasonable price. In the past, for example, CET waivers have been granted to Jamaica for rice and Guyana for cement.

The new GEA Board members are Lance Hinds (Chairman), Attorney-at-Law Nadia Sagar, Business Executive Mark Bender, GEA’s CEO, Mahender Sharma and Vincent Adams. The opposition People’s Progressive Party Civic (PPPC) is yet to submit its nominee. Adams, who is from Linden, is about to retire from a top post at the United States’ Department of Energy.

Previous: Call for amendment to wedding laws as Wedding Expo launched
Next: New division set up to address mercury use, other natural resource issues