New division set up to address mercury use, other natural resource issues 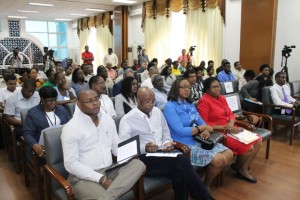 Attendees at the opening of the Training of Trainers Seminar on Guyana’s Extractive Industries.

The Ministry of Natural Resources has decided to establish a Compliance Division to police the scaling back of the use of mercury and overall verify that miners and loggers are complying with Guyana’s laws and regulations.

“The compliance unit really is going to be attached to the ministry so they are going to be going out on behalf of the ministry to just verify that the government’s policies are being understood, well-duplicated, respected and followed,” he said.

Minister of Natural Resources, Raphael Trotman announced the establishment of the unit at the opening of a two-day session on Global Small-Scale Gold Mining as part of supporting technical training in Guyana’s extractive industries.

Trotman explained to Demerara Waves Online News that the Compliance Unit would work alongside inspectors in the natural resources sector. “The inspectorate division is actually going to be available to all the agencies in the sector,” he said. Those include the Protected Areas such as Kaieteur where there have been reports of illegal mining and Wildlife Management.

He said the department would be staffed initially by a small number of persons who have received specialized training.

Addressing the opening of a Training of Trainers Seminar on Guyana’s Extractive Industries, he said the Compliance Unit would be ensuring that a National Action Plan aimed at minimizing and “where feasible” eliminating the release of mercury in air, water and land between 2015 and 2025. “To support the implementation of this imminent Plan, I am pleased to announce that in 2016 a Compliance Division will be established within the Ministry of Natural Resources to inter alia currently assist in addressing the current inconsistent adherence to and low compliance with mining regulations with respect to the use mercury, use of mercury retorts and protective equipment,” he said.

The UNDP is currently assisting Guyana in determining the environmental and health impact of mercury and implement and evaluate robust mitigation strategies.

Guyana’s gold declaration last year amounted to 451,000 ounces which raked in more than US$500 million or about 60 percent of the country’s total exports. Ninety percent of the gold output has been credited to the work of small scale gold miners. The gold mining sector accounts for 15,000 workers who directly support another 30,000 persons.

The training workshop, which is being supported by the Inter-American Development Bank (IDB), is being conducted by the Canadian International Resources and Development Institute in partnership with the Guyana Geology and Mines Commission and the Guyana Mining School and Training Centre.