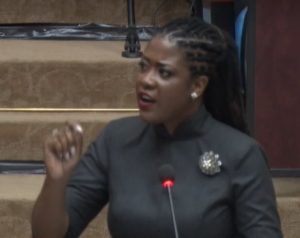 Opposition A Partnership for National Unity+Alliance For Change (APNU+AFC) parliamentarian Amanza Walton-Desir on Monday condemned government’s plan to dissolve cooperative societies that are not cultivating possession of thousands of acres of lands.

“It is not passing strange that a pattern is developing g of dispossessing people, Mr Speaker, of a certain ethnicity who have land. It is known all throughout Guyana that Afro-Guyanese, Mr Speaker, are heavily involved in cooperatives and in cooperative lands,” she said.

Ms Walton-Desir rebutted, saying that “that is an indication that this government intends to dispossess Guyanese of cooperative lands, Mr Speaker, lands, which by law, they have a vested proprietary interest.”

Citing the recent crushing of several houses on a government reserve near a proposed roadway as evidence that the government does not care, she added that the People’s Progressive Party Civic-led administration “is a clear and present danger” to Guyana’s Constitutional rights and freedoms to property, freedom of speech and way of life.

The opposition made known its position less than two hours after Labour Minister Joseph Hamilton announced that the Department of Cooperatives would be collecting data from the Lands and Surveys Commission, Guyana Forestry Commission and the Mahaica-Mahaicony Abary Agricultural Development Authority about thousands of acres of unproductive lands that are in the hands of cooperative societies.

He warned that, “those that want to work for development, we will work with them but what we will not continue to have happen- people utilising the farcical umbrella of coop societies when they have government land in their possession and I have no apology to make. The action, as I have said, is either they resolve these matters or they will be dissolved.”

The Labour Minister said the Guyana government was keen on accelerating food production and food security.

Meanwhile, Chairman of the International Decade for People of African Descent Assembly-Guyana (IDPADA-G) Vincent Alexander accused government of being “more interested in getting their hands on the lands rather than encouraging the coop societies.”

He noted that government has not been mentioning anything that has been doing for cooperative societies. “They are not on the agenda,” he added. He recalled IDPADA-G  doing some work in the East Bank Demerara villages of Mocha-Arcadia. prompting Attorney General and Minister of Legal Affairs Anil Nandlall to remark that IDPADA-G did not build a market but only held market day. “That we trained people in production didn’t matter,” the IDPADA-G official said.