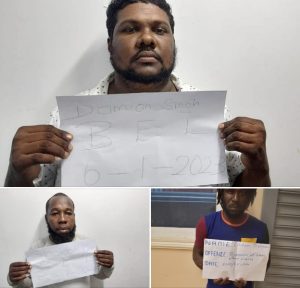 Three men were Tuesday charged with the theft of 11 guns and 601 rounds of ammunition from RADAR Security Services and they were remanded to prison.
One of the men, Carlton Damion Singh, also known as ‘Fatboy’ was also charged with possession of two rounds of .32 live ammunition without a licence and possession of 722 grammes of marijuana.
Also charged with simple larceny of  the guns were Sheldon ‘Noel’ King and Linton ‘Dundie’ Trotman. The trio was remanded to prison until January 25, 2023 by Chief Magistrate Ann Mc Lennan.
They are accused of  stealing two 12 gauge shotguns, five .32 pistols, four 9mm pistols, twenty-five 12 gauge rounds, eighteen live 9mm rounds, thirty-eight (38) live .32 rounds, all property of Radar Security Services on Carmichael Street, Georgetown.
Police have so far recovered six of the 11 guns.
The firearms were stolen from a ‘strong box’ between December 25 and 26, 2022.