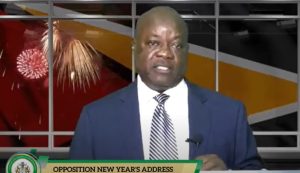 Opposition Leader Aubrey Norton on Saturday- Old Year’s Day- announced that the coalition would intensify its international lobby in 2023 to build on its efforts to seek support to address several grievances including the lack of electoral reform.

The US Secretary of State Anthony Blinken, Vice President Kamala Harris and several Democratic Congressmen have over the past several months called separately for inclusion and transparency in Guyana. A number of those calls had seen the Guyana government seeking to assure that it was governing fairly in the interest of all Guyanese while highlighting that Democratic Congressman Akeem Jeffries had refused requests for meetings to share the Irfaan Ali  administration’s response to criticisms.

In his New Year’s Message, Mr Norton vowed that his People’s National Congress Reform-led coalition would continue to fight for electoral reforms to ensure free and fair elections. “The Opposition’s focus will remain directed at ensuring biometrics at the place of poll and a clean voters list to guarantee elections which are free and fair and can win the trust of all Guyanese,” he said. Government and the Guyana Elections Commission have so far dismissed the introduction of biometrics at polling stations as that risks violating Guyana’s constitution as far as voting requirements are concerned. Unless there is a constitutional amendment, GECOM and government have also said the names of emigrants could not be erased from the voters list.

If elected to government at the 2025 general and regional elections, Mr Norton promised that his administration would seal a contract with all Guyanese that would see them benefitting in several ways. ” We believe that Guyana can become the envy of the world as the country where citizens have opportunities to realize their full political, social, and economic potential. Guyana needs a comprehensive development plan that puts people first and at the center. That is our vision. This is our contract with Guyana.”

Forecasting that “in 2023 things will not get better,” the Opposition Leader said the opposition would be keeping the pressure on the government to implement cost of living relief measures, ensure fair and equitable allocation of Guyana’s resources to citizens, defend the rights and freedoms of citizens and communities, and stamp out government corruption and discrimination.

The Inter-American Development Bank (IDB) has said in its latest quarterly report that inflation in Guyana has soared to more than 11 percent, while at the same time crediting government with cushioning the impact on vulnerable groups such as the disabled, pensioners and farmers.

He lamented what he said were “trumped-up political charges against the opponents of the government.” Among those charged with various offences are Opposition Chief Scrutineer Carol Smith- Joseph , PNCR member Volda Lawrence, Alliance For Change General Secretary Sherod Duncan, and City Mayor Ubraj Narine.